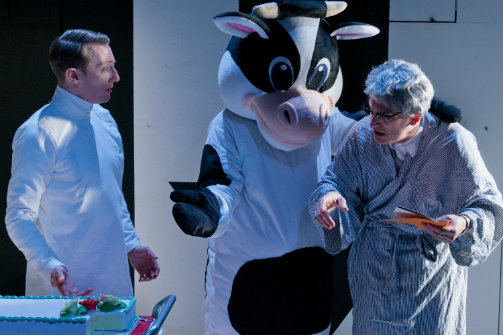 Brent McBeth, Danny Gardner, and Joel Jeske in Everybody Gets Cake! Photo by Jim R Moore/Vaudevisuals.

Let's get this out of the way because I'm sure it's what everyone wants to know: everybody does get cake. They are wrapped Hostess cakes (there were two options the night I attended) and you can grab one on your way out, so don't spend the whole time wondering when they are coming.

But well before the treats, there is another cake onstage, protected by a rope and guard (Danny Gardner) while a disco ball spins above. As audience members take their seats, tourists (Joel Jeske and Brent McBeth) take selfies (using a selfie stick, naturally) with the cake. It's not clear why this cake is so important, but the silliness sets the tone for the show, which is a series of sketches ranging from one-liners to longer scenes.

I don't want to give too much away because a lot of the humor comes from the element of surprise. But to give you an idea of the range of comedy explored, in my personal favorite scene, a naïve wannabe actor arrives in New York, hoping to catch a big break. It is a great send-up of several musical theater tropes and makes excellent use of Maruti Evans's set, which is filled with multipurpose doors and windows. Other highlights are Hans the Sneaky Nazi (imagine a Nazi as a cartoon character) and a symphony composed by Gardner using familiar iPhone sounds. Oana Botez's costumes make it easy to tell immediately what kind of character each actor is playing, necessary in a show as quick as this one.

Gardner, Jeske, and McBeth have such dexterity and expressive facial features that they seem to be descended from the silent comedian greats. Piano player Ben Model, the integral fourth person onstage, is just as in sync as the three of them.

For all the laughs, there are some moments of pathos, like an old man waiting for a visitor. Though there are some callbacks and throughlines, there isn't a clear connecting theme, at least that I could detect, but maybe that was the point -- to expect the unexpected because anything can happen. And sometimes, you get cake.