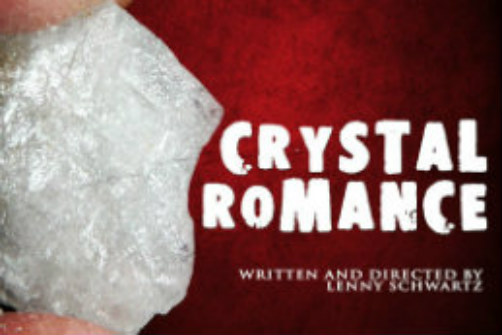 Among the recreational drugs with the highest rate of addiction is crystal meth, which contains industrial ingredients that quickly destroy the body of a regular user, leaving them unrecognizable. Only 10% of those who become addicts ever recover.

In Lenny Schwartz’s Crystal Romance the drug becomes a parallel and a catalyst for the obsessive and interdependent relationship that develops between Rachel (Jourdan Spruill) and Charlie (Elijah Williamson). The story of their relationship is told through flashbacks when Rachel comes to collect her belongings from Charlie’s place, as she tries to walk away from the relationship that is slowly destroying her. Their words and movements convey the conflicted feelings between them: both are angry at one another and yet feel themselves still pulled towards each other.

As the two reminisce we see them meeting for the first time at a party: Rachel was a socially awkward overachieving college student on the Dean’s List whose only experience with drugs or alcohol was a sip of wine at a Bar Mitzvah. However, at the sight of Charlie she foolishly expresses her desire to push her boundaries and she takes the drugs he slips her without knowing what it is or what it will do to her. Later we see Rachel in tears as she attempts to start a new life and go back onto the path from which the drugs pushed her off.

The strength of this short piece lies in the intensity of the emotions presented by the actors. Spruill and Williamson effectively convey the tension created by Schwartz’s script both in their delivery and movements (guided by Schwartz’s direction). Spruill is particularly convincing during her character’s moments of greatest turmoil, showing a woman wishing for the simple life she abandoned after being seduced by sex and drugs.  Through his writing and directing Schwartz has created a powerful portrayal of the harmful effects of an obsessive relationship and a dangerous drug. For more information about the Daydream Theatre Company and future productions of Crystal Romance please visit: thearcticplayhouse.com.