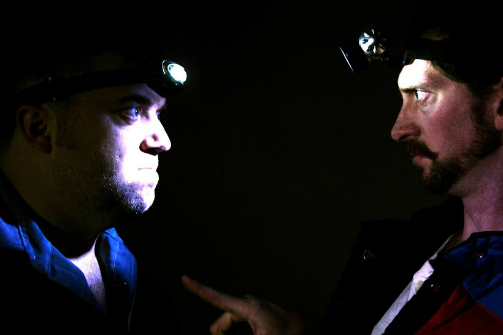 BOTTOM LINE: A thrilling look at what happens to mens' minds when they are trapped in extreme circumstances underground and in the dark.

Turn out the lights and listen. What do you hear? Breathing? Singing? Moans? Heavy steps? As a part of Dark Fest at The Tank, the show Butcher Holler Here We Come was created under the criteria that it was required to use an alternative light source. This show went with headlamps. Throughout the performance there are times where everyone can be seen and others where the pitch black surrounds all. With the inability to use my sight at times, I only had my ears to take it all in. This changed my perception of the performance. Even before the theatre went dark initially I was able to get a feel for the show as soulful songs play over the speakers. With some deep voices singing we descend into the coal mine.

It is 1973 in West Virginia. Five men are stuck in a mine. This is a fictional tale of sacrifice, courage, death, and strangeness. After they become trapped each man has internal and external complications he must face. First there is the lack of food, water, and oxygen. Then there are relationships that create tension. Not everyone is all buddy-buddy with one another and there are a range of back stories. Some are straight forward like K-Bus (Adam Belvo), who got his name from his addiction to Special K. Hiccup (Isaac Byrne) is a religious man with chronic hiccups. Then there are others who we do not know as much about. Jet (Cole Wimpee) is in the process of unionizing and standing up for the miners' rights while Leander Pope (Adam Laten Willson) is the safety inspector for the mine. The mysterious Muskie Pope (Colt W. Keeney) may or may not be dead. As the plot progresses we are informed of their local myths and the fact that the cave-in might have been intentional. Combining moonshine and memories of tragedies past leaves you wondering who is responsible for the disaster. What else could go wrong in the tunnels beneath the earth? Will the men be able to survive?

This performance is the stage version of a thriller. It makes us question what we do not know. These characters have questionable pasts and their actions caused me a lot of unease. I found I couldn't guess what would happen because each man was so unpredictable. I don't think many things in this world are scarier than the unknown. When Belvo's shifty eyes were the only thing illuminated in the space, my hairs stood on end. It actually gave me similar emotions from when I first watched the cult classic A Clockwork Orange. Warped sensibilities mixed with singing. Confusion surrounded parts of the plot for me, but I don't mind not understanding every detail. After awhile most connections revealed themselves and before they did I had the pleasure of watching some innovative staging paired with talented acting.

If you don't arrive early you do run the risk of sitting in the chairs set up on the stage. There isn't any audience interaction, but I know it would make some people uncomfortable having the actors move about around them in such close proximity. Particularly during a climactic scene at the end when they are searching for one another, I did not envy those who had the actors on all sides of their seats. If you want to see something new and different this is for you. Using the headlamps is a construct that really adds to the ambiance. Also, you can support The Tank, which provides free performance space for budding artists.