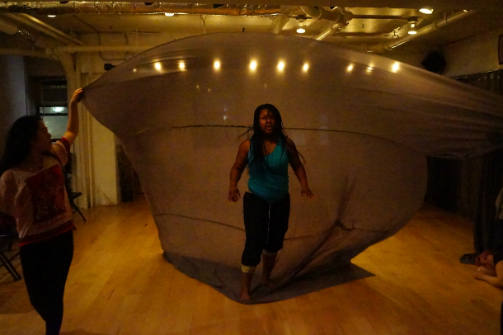 The ensemble of this is my (trigger warning). Photo by Bobby Alford.

What remains after tragedy strikes? How do traumatic events mark our individual and collective psyches, and what do we construct out of the fragments they leave? In light of recent world events, these questions seem especially relevant, and form the basis of Ivy Theatre Company’s Aftermath. Developed as part of this young company’s page-to-stage Trellis Project, Aftermath is comprised of two short plays, Ivy’s own this is my (trigger warning) and Ryan Sprague’s Reach. Together, these markedly different pieces offer a multifaceted exploration of tragedy’s aftereffects.

Directed by Ivy Artistic Director Audrey Alford and devised by its ensemble, this is my (trigger warning) focuses on the physical effects of post-traumatic stress disorder. This highly expressive piece conveys the somatic experience of PTSD through movement and breath, and the result is equally harrowing and beautiful in its simplicity. Writhing on the floor in heartbreaking, visceral isolation, then seamlessly coalescing into images of support and strength, the all-female ensemble cast takes us on the survivor’s journey through fear, rage, despair, and hope. With little dialogue or structured plot, the audience is left to attach our own narratives as we witness each performer go through her personal dark night of the soul and emerge triumphant.

The piece’s dim lighting adds to its dreamlike—or nightmarish—quality, embodying the shadowy mental realms in which trauma takes root. Alford’s use of diaphanous cloth as both costume and set piece serves a similar purpose, transforming the women into looming wraiths and warrior angels alike. Given the technical limits of Lucid Body House’s studio space, these design elements and the ensemble’s physicality go a long way in crafting a striking, emotionally charged ambiance out of raw materials.

Aftermath’s second piece, Ryan Sprague’s Reach, takes a more naturalistic approach to the subjects of grief and recovery, setting personal tragedy against the backdrop of a Katrina-ravaged New Orleans. The play’s action opens during Aftermath’s intermission, as fiery Leila (Katie Braden) spits from a bottle of vodka into her potted plants. Due to the liquor’s high grain content, she elaborates, this seemingly-fatal technique may actually prove more fertile than conventional watering—a theory which, given the plants’ pathetic state, is a little hard to accept.

The destruction-as-questionably-healing motif continues as Leila’s ex-boyfriend Jordan (Christopher Lee) rushes into her life and apartment and immediately sets about renovating the two. Jordan has arrived in New Orleans one year after Hurricane Katrina, where the city hangs in a tense limbo as relief programs prove ineffective and vigilante justice rules the streets. Leila’s own world is similarly suspended; her house survived the hurricane, but her husband Connor now languishes in a coma from storm-related injuries. She has spent the past year in seclusion, writing letters to Connor while waiting for his condition to change. Jordan’s convinced his presence will improve Leila’s life, but we discover he’s just as lost as her, desperate for a physical and psychological anchor since his last girlfriend kicked him out.

Though the dialogue can get heavy-handed, Sprague creates a convincing dynamic as these two wounded characters alternately alienate and cling to each other. Reach ultimately calls into question the nature of healing: Can we ever truly restore what we’ve lost? Is what we build in its place any better? And, when destruction reveals the flaws in what once existed, can we avoid those same mistakes going forward? As in life, the play offers no neat closure, leaving us to speculate how its characters, and city, will move on.

Whether our tragedies rage like Reach’s emotional maelstrom or haunt like this is my (trigger warning)’s specters, Aftermath challenges us to reach into the dark recesses they leave, hold them up to the light, and examine them from all angles. The process may prove confusing, frustrating, or terrifying, but only through this bold approach may we craft our peace.

(Aftermath plays at Lucid Body House, 230 Lexington Avenue, through November 21, 2015. The show runs 95 minutes with an intermission. Performances are Thursdays through Saturdays at 7:30. Tickets are $15 and can be purchased at http://trellis2015.bpt.me.)