Conceived by Manual Cinema; Directed by Drew Dir
Co-Produced by The Tank and Three-Legged Dog 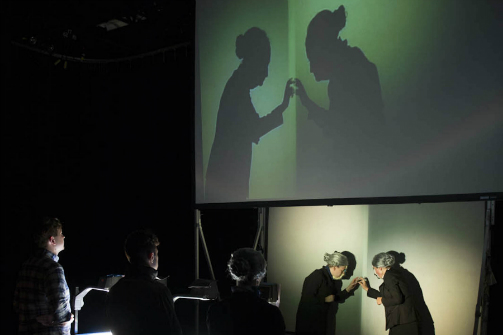 BOTTOM LINE: Music, projections, and shadow puppetry coalesce into a beautiful story about a woman’s struggle with loss.

How often have you heard the argument, “theatre just can’t compete with film?” I know I’ve lost count of the seemingly infinite debates, conjectures, essays, articles, and ranting Facebook posts on the subject. And perhaps we can’t compete. Or perhaps we simply have not taken into consideration the staggeringly creative Manual Cinema and their uncanny shadow puppetry.

Manual Cinema is a Chicago based shadow puppet company who first presented ADA/AVA simply in a window of a first floor apartment. Since then it has traveled the world and was crowned “Best in Festival” at the 2013 National Puppetry Festival. And now, after it’s monumental run at the Tehran International Festival of Puppet Theater in Iran, ADA/AVA is being presented here in New York as part of The Tank’s Flint & Tinder Series. But all the accolades in the world would only scratch the surface; to merely call Manual Cinema a company of shadow puppeteers would be disingenuous. ADA/AVA is a game changer.

Using an artful combination of projections, shadow puppets, actors, and live music, Manual Cinema guides us through the world of Ada (Julia Miller). She and her twin sister Ava (Kara Davidson) grew up doing everything together. The walls of their home are bedecked with photographs of the sisters through every stage of their lives. Their co-dependency continued through their old age; they kept house together, managed the lighthouse together, shared evening tea together, and played their ongoing game of chess together. But when Ava suddenly passes away Ada’s life becomes a world half empty. Her home now stands as a perpetual reminder of her companion, and she is left to navigate the dark labyrinth of grief alone.

Ada’s story is told through a combination of live performance and four projections (manned by Davidson, Miller, Sam Deutsch, Drew Dir, and Sarah Fornace), all used in exquisite detail to create this live silent film. The main projection that guides us through the action is front and center without completely obscuring the puppeteers. It’s like watching a 1920s flick while also watching the cast and crew put the movie together.

On the one hand, seeing ADA/AVA’s inner mechanics offers the audience a rare glimpse into how a show like this is made – we are granted a certain insight to the technical wonders so often hidden backstage or off-screen. On the other hand, watching a live ensemble unfold this technical wonder creates a kind of intimacy we’d otherwise miss in a silent film. (Or any film, really.) These puppeteers are not just presenting this story for us, they’re presenting this story with us.

Manual Cinema’s hands-on approach in conjunction with live orchestrations (performed by Maren Celest, Michael Hilger, and Kyle Vetger, composed by Vetger and Ben Kauffman) immerses the audience in Ada’s emotional landscape as enhanced by shadow puppetry. Shortly after losing Ava, Ada replays the fond memory of the two of them at the carnival as young children. When the carnival returns to town, we share Ada’s wonderment when she looks out the window and sees Ava, or a vision with an uncanny resemblance to Ava, waving from the entrance. The combination of the projections flickering before us and Miller’s emotionally charged performance invites us to feel everything from the nostalgia of the familiar carnival to the dread of watching Ava run into the Mirror Maze.

ADA/AVA fills a liminal space between the highly technical and the highly emotional, between a precise well-oiled masterpiece and a casual theatrical experiment, between cinema and theatre. The sheer volume of detail that each performer, musician, and designer has poured into this production inspires nothing less than pure wonderment. My only disappointment is that the show doesn’t have a longer run. Make time in the next two weeks to see this show.