Written and Performed by Karen Finley 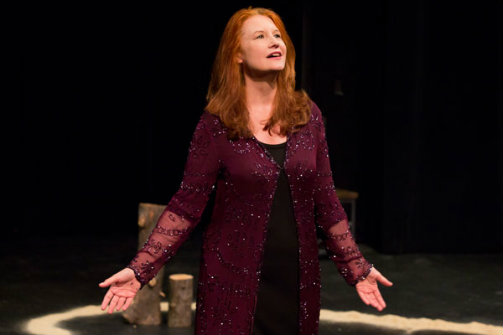 Karen Finley in Written in Sand. Photo by Hunter Canning.

BOTTOM LINE: It's Karen Finley, doing what only she does. Even with her clothes on, she leaves an impression.

Karen Finley is an icon in the world of performance art, but not necessarily for the reasons she would like. Back in the 1990s, she sued the federal government for revoking her National Endowment for the Arts grant solely on the basis of “decency” (or lack thereof). Her name is on a Supreme Court case. Fortunately, none of these legal matters have stopped her from doing her thing. Over the course of her career, Finley has performed in theatres and nightclubs, played Martha Stewart and Liza Minnelli, smeared food on her nude body, posed for Playboy, and taught at NYU. Her new show, Written in Sand, repurposes material from that long career while simultaneously creating something very much of the present.

Like every artist living and working in New York in the ‘80s, Finley witnessed the worst years of the AIDS crisis. Thirty-plus years on, the trauma of that period is being relived by many of the people who survived it, in the names of those who did not. Some of the pieces Finley has gathered here -- they include “He’s Going Home,” “In Memory Of” and “Positive Attitude” -- may be “old,” but the way she approaches them makes them seem fresh, even raw. Finley takes the stage looking like a cabaret singer -- elegantly coiffed, wearing a long gown and heels, then gives a performance that is anything but smooth. She acknowledges friends in the audience and asks us to make room for those friends who are gone but here in spirit. She chats and laughs between monologues, joking about the minimalist set and her runny nose. She takes her time preparing for each emotionally draining piece. It’s all worth it.

When Finley begins to “perform,” her voice transforms, becoming an instrument. It contains the voices of both comfortable, intolerant middle America (from which she, and many of her fellow artists, escaped) and those of angry, frightened people who, already rejected by their families, now find themselves rejected by life itself. Sometimes one set of voices blends into the other. Finley’s words, simple yet searing, take on a musical quality, even when not accompanied by actual music (which they frequently are, performed by jazz artist Paul Nebenzahl). Speaking for and to her lost friends, she careens back and forth between rage, guilt, sorrow, and love. Nothing she says is new, per se, but that’s part of the point: this is a memory piece, intended to excavate grief that may have been buried by the sands of time but never forgotten.

Performance art has a reputation for being highbrow and mysterious, but not in Finley’s hands. The work has little regard for genre distinctions and formalities, but its language and subject matter are surprisingly accessible. After all, some of Finley’s earliest shows were at Danceteria, the now-defunct club where Madonna made her singing debut. Musical interludes between monologues include songs by disco legend Sylvester (himself the subject of a recent stage production) and rocker Freddie Mercury, both victims of AIDS but hardly what you might call “arty.” Besides, Finley has a sense of humor about the place she occupies in the creative pantheon, wryly referring to the show as “Karen and her Dead Friends” and making fun of the reading glasses she now wears on stage.

To be clear, when Finley goes into the past and speaks in the voices of the dying, the dead and those left behind, she’s making serious art right before our eyes. Written in Sand is a loving, sorrowful tribute to all that was lost when AIDS cut through gay New York like a knife in butter. Among all the works, old and new, which evoke that moment, Finley’s may be the most direct, the least “dramatized,” but is no less powerful.