By A.R. Gurney; Directed by Lila Neugebauer
Produced by the Signature Theatre 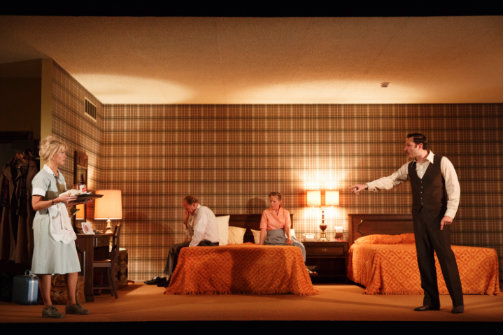 BOTTOM LINE: A solid, touching relationship drama about human connection carried out over multiple stories by one of America’s most prolific living playwrights, A. R. Gurney.

Gurney is enjoying a renaissance in his ninth decade. His latest work – Family Furniture – was performed by the Flea Theater last fall, and his 1990 hit Love Letters will soon be coming to Broadway. Now the nearly forty-year-old play The Wayside Motor Inn is also getting a revival as the opener to his Signature Residency.

The play opens in a motel room outside of Boston. It’s the late 1970s and the memorably hideous period furnishings, from the bedspreads to the lamps, are on display. Each pair of characters and their conflicts are introduced one by one: the characters are in different motel rooms but represented by the single set, the interweaving action expertly choreographed by director Lila Neugebauer. Older couple Frank and Jess (Jon DeVries and Lizbeth Mackay) have arrived to visit their grown daughter and new grandchild. Frank, determined to never set foot in a hospital again, has a heart condition, which causes Jess, feeling useless and helpless, to fuss over him. Ray (Quincy Dunn-Baker) is a sales rep on the road. He’s married, but also has a black book, and dines on cigarettes, booze, and room service.

Vince (Mark Kudisch) and his son Mark (Will Pullen) are in town for a college interview at Harvard. Vince is set on his son going to Harvard, while Mark, who suffers from colitis brought on by stress from his father, has other plans. College sweethearts Sally and Phil (Ismenia Mendes and David McElwee) want some privacy away from roommates so they can have sex. Phil wants the physical but Sally is looking for something more. Finally Andy (Kelly Aucoin), a doctor in the throws of separation who has left his family for a job, has arranged for his wife Ruth (Rebecca Henderson) to meet him. Their civility quickly turns to anger as the unsaid comes to the fore.

Mackay has one of the better drawn roles as Jess, a character who initially seems like an annoying, overbearing housewife, one who struggles with empty nest syndrome and a husband who has lost much of his will to enjoy life. Jess, on the other hand, is not content to maintain the status quo. She wants to find joy and celebrate the baby, and challenges her husband to fight. Kudisch is also strong is a tricky role as a blue collar father wanting more for his son. He’s not a bully but he starts off obnoxious and unsympathetic as he steamrolls over his son’s interests.

But the standout of the play is Jenn Lyon as Sharon, a waitress who encounters Ray when she delivers his meal. She’s a leftover hippie/conspiracy theorist who had a brief moment with Ray a decade before, when he was enlisting and she was protesting the war. He never forgot her and even attempted to track her down when he’d had his first leave. Gurney gives Sharon the best lines, such as when she’s introduced to Ray and warns him about “gamma rays” from the TV and tells him not to eat the burger since it has “tails, ears, eyeballs…testicles…. Beer’s okay. They put crap in it, but at least it’s natural crap.” Lyon had terrific delivery and timing and was a big audience favourite.

Gurney’s plays about New England WASPs have a touch of the old-fashioned: some might call it comfort food for the brain. But he’s created well-crafted comfort that continues to have a lasting legacy.

(The Wayside Motor Inn plays at the Pershing Square Signature Center, 480 West 42nd Street, through October 5, 2014. Performances are Tuesdays-Fridays at 7:30PM, Saturdays at 2PM and 8PM, and Sundays at 2PM and 7:30PM. However, there are additional matinees on certain Wednesday and no matinees on certain weekends. Tickets are $25 through September 22 and $55 beginning September 23. They are available by visiting signaturetheatre.org or by calling 212.244.7529.)