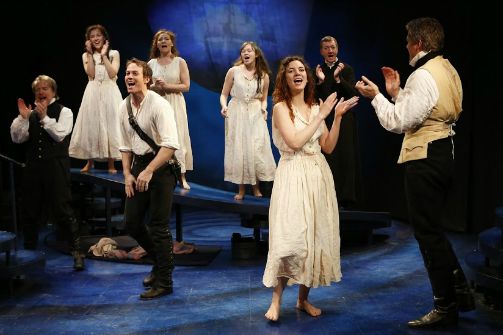 The cast of Transport. Photo by Carol Rosegg.

In early 19th century Ireland, it is an unspeakably terrible time to be poor and a woman, deprived of civil rights and easy victims of the harsh British Empire. Thousands of women, accused of crimes (some true, some fabricated, many minor infractions) are being sent to the largely uninhabited continent of Australia to provide sex to the prisoners while simultaneously reducing the numbers in Ireland amid the devastating impact of the famine.

In writing the book for this new engaging musical, Thomas Keneally, who authored Schindler's List, drew on his own connection to Ireland’s tragic past. At age 20 his wife’s great-grandmother had been deported for stealing a bolt of cloth. As Transport begins, the women come down the aisle of the theatre in chains to be put on The Whisper, a ship bound on Christmas Day for Sydney, a place the priest refers to as Purgatory. The characters include Bride Riordan (Pearl Rhein), a widow who was torn from her son and mother for stealing butter for her bread and Polly (Emily Skeggs), a Protestant with a newborn girl who was falsely accused of theft. Also amongst the dragooned are Maggie (Terry Donnelly), a superstitious somewhat older woman plagued by visions of doom and Kate (Jessica Grové) who was involved in a failed rebellion with Father Manion (Sean Gormley), whose politics have earned him a place on the ship as well.

Keneally’s empathy and compassion for all of the women are evident in the moving book he’s written. The actors embody that empathy in their portrayals of these women who have been treated unfairly but who are not beaten. Rhein, inhabiting the most richly drawn character, is a particular standout, possessed of a strong, clear voice (plus, she plays the violin). Riordan must navigate the emotional tumult of being uprooted from her home while being asked to assist the sweet-natured and kindly surgeon (Edward Watts). As the wisest and steadiest of the women, she has to attempt to keep them safe while under the watch of the contemptuous Captain (Mark Coffin) who looks upon his captives as nothing more than whores and criminals.

Although there is an abundance of tragic events aboard the ship, the passionate songs, penned by Larry Kirwan of the rock band Black 47, provide moments of joy as the women dance, reminisce fondly about Ireland and flirt. Although the Captain is a villain representing the evils of Great Britain, Keneally and director Tony Walton paint the surgeon and a shipman named Hennessey (Patrick Cummings) as worthy men and love interests.

As a side note, it was a treat to have live music featured since many productions, even on Broadway, have cut back in recent years.

As The Whisper arrives in Australia, Keneally, Walton and Kirwan have left room for hope and happy endings for those aboard and it has definitely been earned. Whether you are a history buff, Black 47 fan or want to see a show that celebrates the triumph of the human spirit, Transport makes for an evening well spent.