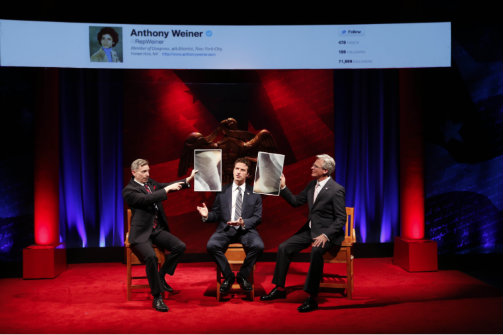 BOTTOM LINE: Great company of actors, but at times limp choices from the production design.

Comprised of a decade or so of toilet footsies and bulge selfies, Tail! Spin! drops us into the private and absurdly public lives of 4 noteworthy politicians. Using only the life-altering tweets, instant messages, phone calls, and interviews of Governor Mark Sanford, Senator Larry Craig, and Representatives Mark Foley & Anthony Weiner as source material, playwright Mario Correa has assembled an even-handed critique of elected officials, mainstream media, and the public’s ravenous appetite for juicy details. Despite the production’s repeated efforts to remind us that every spoken word is lifted verbatim from honest-to-God interactions, there is still a sense of collective perplexity in the audience at the veracity of accused pedophile Mark Foley (Arnie Burton) assuring us “There was never anywhere in those conversations where someone said, ‘Stop,’ or ‘I’m not enjoying this.’”

Despite dealing with some dense doublespeak and politicking, Correa’s script is accessible and engaging, and Knechtges' direction deftly balances hilarity and hardship, portraying the all-too-unfunny reality of these families’ lives. In a brisk 75 minutes, the audience member blissfully ignorant of politicians’ sexual plights can easily follow an international romp from a lewd encounter with a police officer in Idaho to an extra-marital Argentinian sexcapade, with a stopover in New York for some accidental tweeting, and a side trip to Florida for an underage photo request.

Although the production design often seems too worried about holding our hand through the shifts in character and location, the performances are excellent and the sheer volume of preposterous utterances is astounding. Shining through the satire and caricature of Correa’s script is a none-too-gentle reminder of the unravelling state of democracy in America. But it’s a lot of fun to watch unravel.