By Kim Davies; Directed by Tom Costello
Produced by The Flea Theater 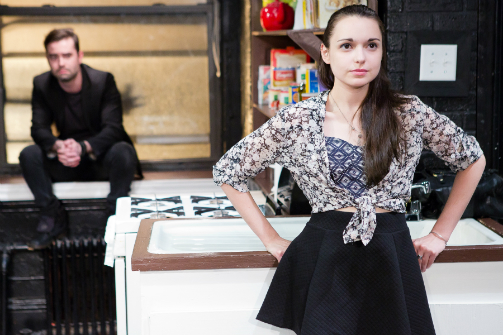 BOTTOM LINE: Strong performances and compelling material make this play enthralling, but the script does not explore the power dynamics as fully as it could.

The play begins when 20-year old college student Julie (Madeleine Bundy) runs into 31-year old John (Stephen Stout) in the kitchen at a house party. While Julie recognizes John immediately he cannot quite place where he knows her face from. She finally reveals to John that she is in fact the daughter of the pretentious photographer he interns for. She tells John that she will not tell her father that she saw him at this party, and later playfully threatens that she will. We are left wondering what the big deal about being seen at a party would be until we learn that this is not in fact a normal party. Rather, this happens to be a sadomasochistic sex party where attendees seek out new partners to play with and act out “scenes.” From the get-go Julie projects a calculated image of helplessness and submission, shown to the audience when she feigns an inability to use John’s lighter to light her cigarette and a dramatic fear of the lighter’s small flame. Her knee-high socks and Lolita-esque schoolgirl skirt all seem to project an image of a young girl looking for trouble.

John quizzes Julie on her lack of experience and tells her that she exudes submissiveness, telling her that he is a “het dom.” While Julie complains of her lack of experience, due in fact to the lack of sexually experimenting boys in her college town in Ohio, John reminds her that even with her submissiveness she has a choice of what will happen to her in the sexual situations she desires. While Julie has expressed a desire for something that might destroy her, John still seems harmless enough. While John first denies his desire to “play” with Julie the mutual attraction becomes apparent and he soon is kissing her shoulders. Julie tells him to be rough, to not be gentle and sweet with her and soon he is pulling her hair and pinning her down. When John slips out for cigarettes and condoms Julie opens the bag he leaves behind and finds a collection of knives inside. She gasps, suddenly aware of the danger she may willingly be putting herself into.

The most compelling aspects of the play are when Julie turns the table on John and threatens his dominant role. Julie asks John what he thinks he is going to actually accomplish by playing constant step and fetch for her dad and says, “Do you think you’re going to be my dad?...Do you know what my dad was doing at 31?” At 31, John has held little in means of employment other than a series of barista jobs. Slaving away as an intern seems to be his only hope of achieving the artistic dreams he clings to. As the daughter of his boss and mentor, Julie holds a powerful hand. When John shows that he has no limits in his devotion to her father, he weakens the role of dominance and power he wishes to project.

While playwright Kim Davies has certainly found intriguing material here, she could have created a more powerful piece by giving more focus to the shifting power dynamics of her characters and their lives. Playing upon the two’s shifting power dynamic would have created greater suspense. John dominating Julie and devastating her by giving her what she thinks that she wants is somewhat predictable, although it certainly does grab your attention. Madeleine Bundy and Stephen Stout (both previously seen together in The Flea’s a cautionary tail) give intense performances and fully explore the complexities of their characters. Bundy’s wide brown eyes exude every bit Julie’s sometimes calculated innocence. The unusual staging and use of The Flea’s smaller stage makes the production more visually compelling. In addition, director Tom Costello and fight director Jesse Geguzis succeed in staging the many physical struggles of the play that mirror the shifting power dynamics. Overall, Smoke is an attention grabbing and compelling show that captivates the audience until the very end.