Off Off Broadway, Concert
Runs through 8.22.14
The Celebration of Whimsy, 21 Clinton Street 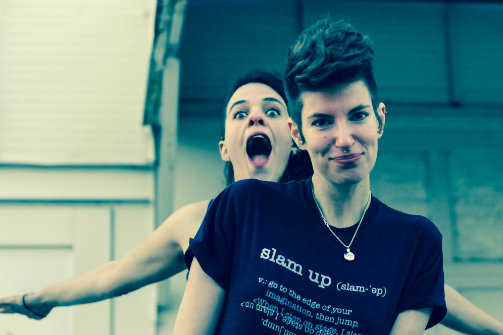 Cali Bulmash and Emily Lowinger in Slam Up. Photo by Jon Hain.

Luckily for Cali Bulmash and Emily Lowinger, the pair behind the charmingly messy Slam Up, I happen to like spoken word, singer-songwriters, awkward transitions, and girls that look like guys, because if I didn’t, this show could get real grating real quick. Serving up a grungier, sexually explicit, lesbianic version of the YouTube darlings Garfunkel and Oats, this pair manages to mix irreverence and unabashed sincerity in a way that is mostly charming and only occasionally annoying. By the end of this hour-long plotless concert I was ready to leave, but ultimately glad to have gotten to know them. By airing out their dirty laundry while sincerely selling their touchy feely friendship message, they all but force the audience into intimacy, and I for one am happy to oblige.

If you like your theatre neat, scripted, and rehearsed then Slam Up is probably not going to be your bag. Better suited for a grungy bar in Bushwick than a Manhattan theatre, it’s clear that the content has been given a lot of thought, but the performance feels more than a little off the cuff. The show is a mixture of poetry and patter songs that cover everything from break-ups and breakdowns, to STDs, bisexual ambiguity, self-sabotage, and of course love, love, love. For my money their attempt at sketch comedy (featuring a handful of costumed characters that were all from the south and seemed surprised to be given stage time) could be nixed in favor of more tunes. Musical highlights include the opening number about forgetting people’s names and a little rap ditty for all of us out there for which Christmas is just another day to get laid. With a slogan that reads “Potlucks Before Hot Fucks,” Slam Up might be a little rough around the edges, but in this case at least, the imperfections add to the appeal.