By Aphra Behn; Directed by Rebecca Patterson
Produced by The Queen's Company

Off Off Broadway, Play Revival
Runs through 4.5.14
The Wild Project, 195 East 3rd Street 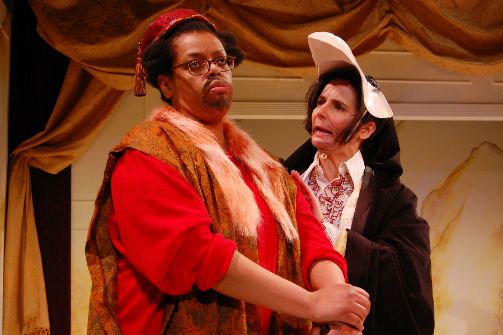 The Queen’s Company’s all-female production of Aphra Behn’s Sir Patient Fancy showcases a restoration comedy in all its bawdy grandeur. Written in 1678, the play follows several pairs of lovers as they attempt to join together for a long awaited sexual encounter, matrimony, or in some cases both. Playing with revelation of information beautifully, only the audience can see what is actually happening, and who is who, as the characters struggle to surmount the challenges brought against them by fate or their own poor judgment.

The situations are funny enough in themselves: Natalie Lebert’s performance of Sir Patient Fancy’s hypochondriacal illnesses often drew an ovation from the audience. Yet, it is the character’s thoughts and reactions that really get you rolling in the aisles. The private reactions of Lady Fancy, played masterfully by Tiffany Abercrombie, as her schemes are dashed or nearly discovered, may be the best part of the whole show. All the performers have a good grasp of the language, and are able to keep the show’s incredibly brisk pace.

Every character has asides, letting the audience in on their thoughts or reactions. While these asides are often effective, they might be slightly confusing for those not familiar with the concept. This point of possible confusion was not helped by the choice to specially light and freeze-frame a selection of the asides. They were highlighted for a purpose, certainly, but they confuse the convention. Such minor fumbles are easily forgiven in the ensuing cascade of bumbling witticisms or physical guffaws that permeate the performance. Director Rebecca Patterson has hit upon something that theatre in New York often forgets; we go to the theatre for fun. We want to have a good time, we want to laugh, we want to learn something.

Patterson crafts a production that connects to a modern audience; altering references to make them contemporary without destroying their classic aesthetic. Using contemporary music, a nearly ‘all eras’ costumes design, and a hilarious running joke with cellphones, the performance connected this classic text directly with the audience’s context. Behn certainly meant for the music, costumes, and references to line up with current events. Updating and adapting them allows her humor and her wit to shine. This production has managed to walk the fine line between playing solely to the classically versed or playing solely to the Shakespeare-averse. The sexual jokes and populist zingers land reliably while allowing room for the cultural critiques and philosophical jabs.

An all female production of an acclaimed proto-feminist author by a female director could easily be lambasted for any number of misogynistically imagined faults. However, I believe that this production has neatly sidestepped that morass with good humor and a beautifully bro-tastic take on masculinity for the male characters. The critique of gender and patriarchy is there certainly, but it only adds to the evening’s enjoyment and supports rather than distracts from the action on stage.

(Sir Patient Fancy plays at the Wild Project, 195 East 3rd Street, through April 5, 2014. Performances are Wednesdays through Saturdays at 8PM and Sundays at 3PM. Tickets are $18 and are available at QueensCompany.org or by calling 1-866-811-4111. Wednesday nights are 2-for-1 tickets.)