Off Off Broadway, New Play
Runs through 8.23.14
The Players Theatre, 115 MacDougal Street 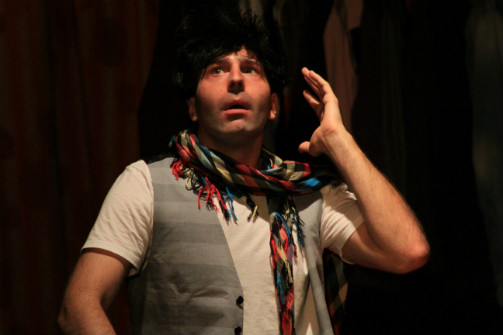 BOTTOM LINE: This hilarious comedy finds humor in exploring the romantic entanglements of Taylor Swift and pokes fun at our celebrity fixated culture.

Of all the celebrities whose romantic histories are documented and analyzed by the media, none seem to have been given the level attention of country singer turned mainstream pop star Taylor Swift. In the past five years Ms. Swift has been romantically linked to at least seven different men and the tabloids have been there every step of the way, photographing and conjecturing at every coffee outing and hand hold, creating mind numbing storylines for the public to follow. Swift herself has used her wealth of a romantic history as inspiration for her catchy pop hits, penning songs for each of her former beaus and dropping hints as to just which song was written for whom, adding further interest and speculation to her love life.

These stories served as inspiration for the creation of the show Seven Seductions of Taylor Swift, which conjectures at the stories behind each of these romantic entanglements, giving a different vignette to each of the seven men who have been entangled with Swift. This show instead features one performer and seven writers: each scene was written by a different female comedy writer. The use of so many different writers makes the style, language, and pacing of each scene different from the previous one. Due to the use of differing writers the monologues of each of the characters seem to be more believably from different personalities as each of them speak in an entirely different manner. Introducing each scene of the show is a short video introduction (created by Jonny Taylor) that reminds you of just who each celebrity is and what they sound and look like in real life.

Thaddeus Shafer plays all of the seven men, using wigs and wardrobe changes to transform from one suitor to the next, changing his demeanor and manner of speaking with each change in character. While Shafer has built a name for pursuing more serious roles, such as in Paula Vogel’s How I Learned to Drive through his involvement in Los Angeles’ The Illyrian Players, he excels within this laugh-inducing comedy as he plays each doofy (Joe Jonas) and douchey (John Mayer) boyfriend. The stories of the suitors are told in chronological order, starting with Joe Jonas and ending with the most recent tale of British boy bander Harry Styles. His laugh out loud impersonations are spot on and play into the more laughable aspects of each of the celebrity’s public personas.

One minor issue in the production is the fact that the props sometimes block out the projection of video across the back wall of the stage. Shafer already has much to do with doing all of the wardrobe changes and scenery/prop moving on his own. Perhaps someone can help out to make the scene changes more seamless?

While some of the stories here follow those etched out by tabloid speculation, other writers pen different twists on the gossip mag narratives, giving the power to Swift.  She pushes aside Joe Jonas’ attempt to give her his purity ring and demand a long term commitment from her and wisely walks away from John Mayer’s plot to take her virginity in the bathroom of a karaoke bar in Arkansas. The show is somewhat slow to begin but gains momentum halfway in with Jake Gyllenhaal’s scene, during which he and Taylor have a heated exchange all through text messaging, a timely choice given how much flirtation and seduction now occurs via this manner of communication. In a rather authentic feeling scene, Taylor sends long heartfelt texts discussing whether or not she feels she should sleep with Jake while he ignores her while playing video games and masturbating to pornography. Their game of cat and mouse was one of the most enthralling scenes of the show and had most of the audience doubled over in laughter.

Of course this all sounds a little brainless, but there is insight and reflection here (not to mention some clever, well written scenes including Connor Kennedy and his declaration that he is America). These scenes give glimpses into the demands and sacrifices of celebritydom as Swift's courtship with Twilight’s Taylor Lautner is dictated by his manipulative manager and she watches Glee’s Cory Monteith (who died of a drug overdose) do drugs as the pressure of being a public figure from a troubled family takes its toll on him. One Direction member Harry Styles attaches himself to Swift in an attempt to become the next Justin Timberlake, noting that talk of him putting out a solo album only occurred once his name became attached to hers.  Even after Swift catches onto his game and tosses him aside he becomes so enamored with her gift as a performer that he sneaks into her concerts to watch her in her element. In the end it’s not Ms. Swift who looks like a fool, it’s the men who are foolish as they are more interested in their own solipsistic reflections and selfish motivations than they are in being in a real relationship. According to the most recent bout of gossip, Swift has taken a break from dating and if the stories here bear any resemblance to reality, then this certainly seems to be a wise choice.

Being aware of the mindless gossip surrounding Swift and having some knowledge of who the men are that she was attached to will help make this show more humorous for you, but it is not a requirement as the show as a whole lampoons our fixation with celebrities and what sort of dim-witted douche bags manage to climb their way into the limelight.

(Seven Seductions of Taylor Swift plays at The Players Theater, 115 MacDougal Street, through August 23, 2014. Remaining performances are Tuesday August 17th at 7PM; Thursday August 21st at 2:30PM; and Saturday August 23rd at 12:30PM. Tickets are $18 and are available at fringenyc.org.)