The Room Nobody Knows 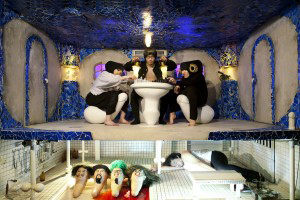 I have to admit that I was very intrigued about a Japanese production from an acclaimed experimental theater ensemble that was being produced in partnership with the Public Theater, and The Room Nobody Knows did not disappoint. Performed exclusively in Japanese and written by acclaimed theatrical icon and lapsed psychiatrist, Kuro Tanino, The Room Nobody Knows tells the story of two brothers who live in a less than conventional apartment in Metropolitan Tokyo. The younger brother, who desperately seeks the approval of his older, stronger brother, is trying to create the perfect birthday gift for his beloved sibling. You don't meet the two brothers until after first encountering two human-like creatures, one with ram horns and odd teeth and the other with pig like features and glasses, who are setting up the upper level of this twisted apartment for the celebration. Enter the penises. That's right. I said penises. Multiple penises. Penis chairs. Penis tables. Penis doorknobs. Penis musical instruments. You name it. There's a penis on it. Throw in a creepy white half floor basement with surgical tools and busts of the older brother attached to -- you guessed it -- penises, and the stage is set.

The Room Nobody Knows is unlike anything else that is currently playing on a New York stage. Did I understand everything I saw? Absolutely not. Did I enjoy it? Yes. It reminded me of a prolonged art instillation at a modern art museum that kept getting weirder and weirder. It was nice to get a glimpse into Japan's cutting edge theatre scene. I'm glad that the Public and the Japan Society aren't afraid to push audiences way out of their comfort zone. As I write this review, I realize that I like the piece more and more. It was unique and way the hell out there and made no apologies about it. Sadly, it was only a five show run but it is touring the country for a bit so tell your adventurous theatre friends to check out The Room Nobody Knows.