Potion: A Play in Three Cocktails 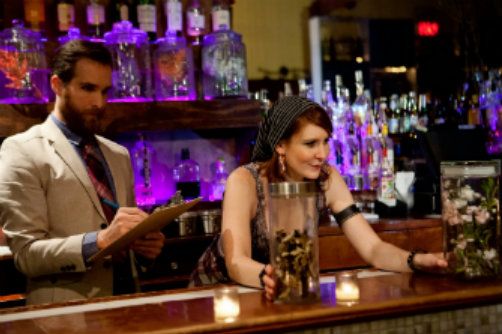 Raife Baker and Natalie Hegg in Potion: A Play in Three Cocktails.

BOTTOM LINE: A verse play presented in an ultra specific spoken voice style. Plus a musician and three cocktails included.

Potion: A Play in Three Cocktails is a site specific new work by Kiran Rikhye, who has created a “bizarre, metrically-shape-shifting, occasionally rhyming, often repetitive verse play.” (That is the company’s own analysis of the text, via the program). Stolen Chair’s latest endeavor is so stylized that it’s difficult to draw a genuine emotional response from its audience. But the production is truly ambitious and refreshing, just like the drinks we're served throughout the show. You’ve probably never heard a play delivered like this. And you probably won’t again.

The action takes place at Charley’s Potion Lounge (played by People Lounge, LES) where Charley (Natalie Hegg) concocts potions for feeling anger, feeling fourteen again and everything in between. We quickly meet a peculiar array of employees and clientele. Charley’s got an insufferable crush on her tough boss Tom (a hilarious Raife Baker). Andi (Liz Eckert) is a loner, until the nerdy Philip (David Skeist) takes a potion which makes him sexier. Emma (Molly O’Neill) is the nice girl who starts saying what’s really on her mind after downing the anger potion (most of her blocking involves standing on tables and chairs). Jim (a subtle and excellent Noah Schultz) watches it all from behind the bar, adding playful commentary while washing glasses.

The only thing resembling a plot here involves Mr. Forth (Jon Froehlich), the Inspector of Health and Safety, who’s barged in with an ultimatum: make a love potion or Charley’s is shut down for good. How will he know if Charley has actually made a love potion? Well, she’ll need to drink what she concocts and then Tom should finally love her back. Think her potion will work? Think Tom will just love Charley anyways? In regards to this plot line, Potion sadly travels a predictable path to a pat conclusion. There are, however, some neat twists and turns involving some of the other characters. Skeist shows true range as his Philip goes from nebbish to self-assured and back again.

I actually opened myself up to the spoken word/heightened language presentation quickly. These actors are adept at speaking in a lovely rhythm with the instruments (phenomenal live music by Sean Cronin). And just when it starts to wear thin, the production wisely wraps up (the running time is just over an hour). But because the actors were so solid and because this company had access to such a wonderful space, I almost wished I could have seen them in a play with the same story sans the spoken word element. This style does not allow for the outpouring of much palpable passion within these characters, and hence I never cared what happened next in the “story.”

But that’s not to diminish the work of writer Kiran Rikhye, director Jon Stancato (who stages each moment with gusto) or the cast. Stolen Chair took a risk with this show; it’s not every day a theatre company says “Hey let’s do a spoken word opera in a lounge and give out three drinks called Curiosity, On Pins and Needles and Love.” I applaud them for a bold, brave move.

(Potion: A Play in Three Cocktails plays at People Lounge, 163 Allen Street, extended through June 15, 2014. Performances are Sundays at 7PM. Tickets are $45 and are available at brownpapertickets.com. For more show info visit stolenchair.org.)