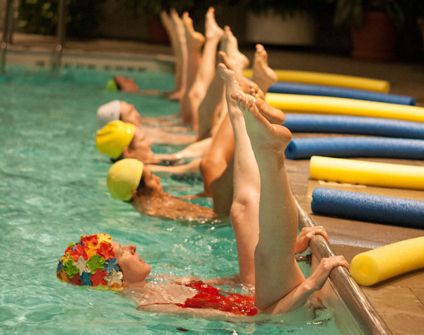 BOTTOM LINE: An enjoyable immersive theatrical meditation on the role of “the pool” in our everyday lives and the complexity of the human experience.

As a long time West-sider, I rarely venture over to the unexplored wonderland of the East. This Is Not A Theatre Company's newest production is about as far away and difficult to get to from my comfy neighborhood as possible, but I am glad that I stepped up to the traveling challenge and saw the inventive new work, Pool Play, by a group of young, eager, and talented theatre artists. Pool Play is literally performed in a pool inside a health club on 25th street and FDR Drive. Plan to arrive at least fifteen minutes before “curtain” since the venue is a little hidden if you are not familiar with Waterside Plaza. But it is definitely worth the trip.

The audience is invited to sit at the pool's edge with their feet in the water. Ponchos are offered but, in my opinion, unnecessary. It might not be the time to break out your designer duds, but you're not really going to get that wet. You are at a pool after all, so you already know what you're getting into. The audience is even invited to join the cast after the show in the pool. There are changing rooms available, so bring your swimsuits and dive in after the show. Believe me, you will want to take a quick dip after watching the hour and some change performance about the glory that is the swimming pool. For those who don't want to be so close to the action, a limited number of land seats are available as well.

The production explores water and our relationship with it. While there is not a traditional narrative, the cast and creatives piece together vignettes about wealthy pool owners, small town pools, segregated pools, training for competitive swimming, a snarky fish who think that he is better than humans, synchronized swimming, games of Marco Polo, musings on discovery and our place in the world, and many more to transport the audience back to a time where the pool, and water in general, offered endless possibilities and wonderment, and how we can still find that childlike wonder today.

I am a huge fan of Charles Mee, the resident playwright at Anne Bogart's theatre ensemble, SITI Company. He is known for his site specific theatre and experiments in text collages in works such as one of my favorite plays, Big Love. If you ever get a chance to see this remarkable work, just do it. Mee contributed several monologues to Pool Play that focus on discovery, life paths, and how to we get out of difficult situations. These were a highlight for me.

An intimate singing of a stripped down version of REM's classic "Nightswimming" performed in the moonlight, and the musings of a fish who decides that his life is better because he is not bogged down with pesky emotions such as love are also stellar moments in this aquatic delight. The program didn't feature any photographs, so unfortunately, I can't single out any individual cast members by name. I don't know that I would be able to pick just a few to commend, as the entire ensemble showed moments of skill, wit, and brevity far beyond their years. Erin B. Mee does a superb job directing this young group of artists to create a cohesive look at our fascination with the water, entertaining and engaging the audience along the way.

If you are looking for a unique experience (how often do you get to see theatre while letting your feet dangle in a pool?) go see Pool Play. The audience gets a first-rate immersive theatrical experience, that is far less invasive than works such as the long running Sleep No More, but still quite inventive and enjoyable. You'll leave feeling good and if you jump in post-show with the cast, maybe a little wet as well. So, dust off your swimsuit and trek it over to the east river and dive into Pool Play.

(Pool Play plays at The Waterside Pool, 25 Waterside Plaza, through March 8, 2014. Performances are Fridays at 8PM and Saturdays at 6PM. Tickets are $30 and are available at artful.ly. For more information visit thisisnotatheatrecompany.com.)