By Brett Neveu; Directed by Karen Kessler
Produced by A Red Orchid NYC and Bisno Productions 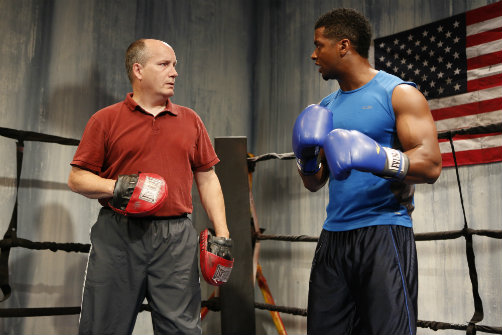 A washed-up but wise trainer preps an ambitious contender from the wrong side of the tracks for the fight of his life….and they both learn valuable life lessons along the way. Such is the predictable premise behind The Opponent, whose set-up sounds straight from Stallone’s Rocky, or basically any boxing film ever made. But if you stick with it, this play becomes something much deeper and far more heartbreaking.

Chicago playwright Brett Neveu is a master of male angst in the new millennia, a skilled writer who often plumbs seemingly familiar characters and situations for unexpected depth and emotional insight. (Witness his devastating exploration of former jocks sideswiped by mid-life crisis in Red Bud). The Opponent uses a familiar trope and turns it on his head, becoming not the expected parable about the triumph of the underdog, but a sobering look at how some underdogs end up down for the count, no matter how hard they try.

Things get off to a rocky start with a sluggish first act that can’t quite escape the predictability of the conventions it establishes. As soon as muscular young hopeful Donnell (Kamal Angelo Bolden) faces off against aging, stooped trainer Tre (Guy Van Swearingen), it becomes clear where this is going to go…and it goes there. In the tradition of sports drama, these two men overcome their many differences through a love of the game—in this case, boxing. Donnell leaves Tre’s crumbling gym pumped for victory, and Tre looks on, wistfully yearning for the glorious champion’s career that was never his.

Hollywood might have ended the story there, but not Neveu. Act two happens five years later. Donnell lost that big fight, and now he’s become the thing he despises most, a “road dog,” a boxer who hops from fight to fight in one Podunk town after another, slipping farther from any chance of greatness. Tre is older and frailer, and his memory is failing. They try to pick up where they left off, only Donnell no longer has the will to fight, and Tre has no hope. The contrast between the optimism of act one and the despair of act two is shattering, and gives the play an unexpected emotional jolt. What once appeared to be an easy story of two men overcoming their differences transforms into an unsettling examination of two strangers learning to live (or not) with failure.

Neveu’s dialogue has a poetic everyday-ness, and his characters are brought to bristling life by Bolden and Van Swearingen’s committed, fearless performances. Bolden captures Donnell’s youthful swagger in act one and his weary defeatism in act two, appearing, through sheer force of will and talent, to age five years and gain fifty pounds during the fifteen minute intermission in between. Van Swearingen embodies Tre’s resilience and despair, and is particularly strong in the second act, when a weakened Tre tries to rally Donnell. Director Karen Kessler shapes these strong performances into nuanced portrayals, although she can’t overcome the exposition and cliché of the first act.

Joey Wade’s ingenious set design transforms Theater C into a dilapidated Louisiana boxing gym, replete with peeling grey paint, faded posters of Muhammad Ali, and a crumbling boxing ring upon which most of the action is played. Myron Elliott’s costumes tellingly trace Donnell and Tre’s journey, from Donnell’s shiny new Everlast gloves which transform into faded, dusty mitts in act two, to Tre’s frayed Henley shirts, which become more ragged and faded with time. Fight director John Tovar and boxing trainer Sam Colonna transform Bolden and Van Swearingen into believable fighters, and several scenes take place while the actors box. In all, despite a weak start, The Opponent packs a surprising emotional punch, showcasing the intimate emotional realism for which A Red Orchid Theatre is known.