Off Off Broadway, New Play
Runs through 8.24.14
The Players Theatre, 115 MacDougal Street 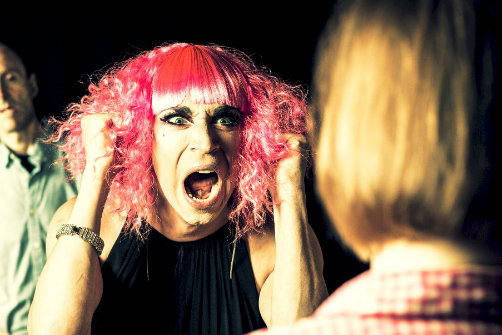 BOTTOM LINE:  For anyone who is a fan Tracy Letts’ August: Osage County, Mother’s Day will be just your cup of tea. You will just need to wait for a bit.

But nothing is ever that simple. Joey, it so happens, is a drag queen named Helen Back (say it aloud), and the character’s first scene is a tour de force for Gregory who zings barbs left, right, and center, delivering one-liners Tracy Letts would kill to take credit for, all while sporting a wig only Cher might pull off in public. It’s clear from the start these parents are extremely accepting of a son who is 150% out and a successful drag queen. Their easy banter includes rapid-fire one-liners in quick succession. It’s very funny writing and delivery.

Things get considerably darker when Nicky comes up from the basement and joins the family gathering.  Joey is clearly resentful of the support his parents give his lazy younger brother. (Nicky isn’t a Rhodes Scholar, he got fired from Arby’s.) When mom, dad, and Nicky press Joey about why he has returned home after an 18-month absence, he tearfully and proudly turns to Liz and says, “You’re going to be a grandmother.” And it is with this pronouncement that the play takes the darker turn we knew was coming.

When Joey retreats to the basement, he and Nicky get high and start naming the baby based on absurd combinations of New York City subway stations. The scene is gut-splittingly funny with equal amounts of laughter shouted from both sides of the proscenium. What follows could be one of the best passages of the evening, an intimate scene between two brothers who solemnly reflect on the family dysfunction. The brilliant writing is matched by superb acting and direction.

The introduction of Suzanne DeMarco (an effective Rhanda Ayers) to the evening’s festivities is welcome, if not a little forced. We see in DeMarco’s scene with Joey a clear attempt to bring levity back to the play, and more importantly, to give Joey and the audience the satisfying reaction from a maternal figure about his decision to have the baby. Doesn’t everyone have someone in their life they wished was their mom or dad, or both? Also strong is Neal Lerner, whose eventual hurt provides a completely convincing reversal of his otherwise placating and sensitive “super dad” attempt at the start of the evening. By the end, Mother’s Day sums up how many must feel after a family feud. As the lights fade, Liz quietly admits, “I shouldn’t have said those things.”