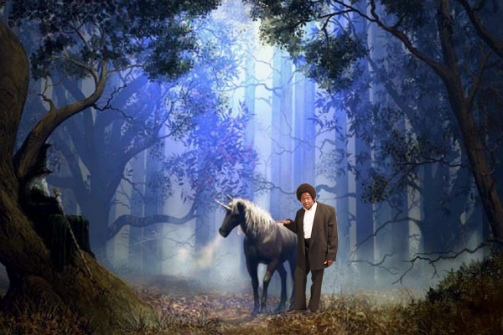 BOTTOM LINE: A heartfelt and hilarious one-man show that explores the roles of black men in films and television and how they shape the culture around us.

Jamil Ellis is a comedian who has crafted a one-man show to explore the trope of the Magical Negro. What is the Magical Negro, you might be asking? To quote from the program, he is “the black guy in the movie who helps the white lead find himself, learn to dance and/or get the girl.” To help us get an idea, Ellis shows us clips of Will Smith in The Legend of Bagger Vance, a mystical caddie who helps Matt Damon learn golf, and Whoopi Goldberg in Ghost, helping Demi Moore and the late Patrick Swayze solve a murder (and share a kiss) from beyond the grave, and almost all of Morgan Freeman’s entire career.

Ellis invents a Magical Negro all his own: Jimmy. Jimmy is funny, inviting and sincerely lovable. All he wants to do is help people. So what could possibly be wrong with that? Well, these characters are essentially two-dimensional sidekicks to the leading men who are almost always white males, helping the white men become fully realized characters in the audience's eyes, while the black characters remain caricatures. But all can’t be so bad for black actors, right? I mean, we’ve seen black actors in plenty of roles before.

For instance, Ellis tells us a story where he almost landed a featured role in Forest Whitaker’s 1993 HBO film Strapped. Ellis shows us the scene he himself almost acted in: a young black man in a bodega argues with an Asian man, pulls out a gun, then accidentally shoots a little black girl. He also shows us Don Cheadle in another choice role in The Family Man starring Nicolas Cage as Cash, an angry black man who argues with an Asian convenience store clerk over a lottery ticket, pulls out a gun and threatens to shoot him, only for Nicolas Cage to swoop in and save the day.

Ellis’ point holds water. In this day and age where audiences applaud and award actors such as Brian Cranston for portraying fully realized, three-dimensionally complex characters on TV and theater, why aren’t more black men cast in such roles? Or as Ellis hilariously puts it, “Where are the Black Hobbits?” (If you require even more recent evidence, just look at the cast list for Ridley Scott’s upcoming film Exodus where are the powerful Egyptian characters are cast with all white people, while the black actors are cast in roles as thieves and servants.)

This type of irresponsible casting is dangerous for a culture surrounded by the very media and images that influences our society on a daily basis. Ellis, a recent father to a precious baby girl, is worried, and rightly so, about the future generation of people of color who have limited visibility in media. If all people of color see are images of themselves and props to help the larger white characters improve in their lives, while the people of color are cast aside, or worse, portrayed as violent criminals, will people of color believe that’s the only role they play in society?

Ellis delivers some hilarious monologues as both himself and as Jimmy. He also sings and dances. When he was younger, Ellis dreamed of starring in West Side Story as Tony, but realized he would never be cast, so he sings “Something’s Coming,” for us to just prove he can do it. As Jimmy, Ellis sings a sardonic theme in defense of the Magical Negro set to the theme song of "Reading Rainbow." But it is the social context of his show that is incredibly powerful. During a moment in the show Ellis dedicates to talking about current events, he pauses. With the recent events happening in Staten Island, and in Ferguson, Missouri, Ellis has little to say because it is “too close.” Indeed, it is incredibly difficult to talk about race in any venue, but Ellis is extremely gifted and intelligent when he does, and he does it well.

Ellis ends his show on a note of hope and optimism. He brings his ridiculously beautiful baby daughter on stage and sings a sweet lullaby to her, wishing for a brighter future for her where she can see powerful images of people of color in society and feel accepted. I truly hope that dream comes true.