$14 for groups of four or more

To purchase tickets visit blessedunrest.org or by calling 646.238.0829 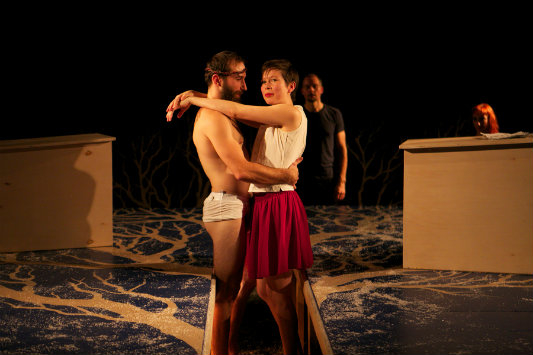 BOTTOM LINE: This one of a kind production, focusing on a deceitful protagonist, features powerful performances and surreal staging.

In Blessed Unrest’s production of Lying, the device of an unreliable narrator is taken to an extreme level  with a protagonist, Lauren (Jessica Ranville), who keeps telling us that everything she just told us might be a lie. Events that are performed are corrected as she admits that that was not the way things happened after all. The play is based upon the memoir of the same title by Lauren Slater, in which Slater tells stories comprised of half truths and lies, admitting to having a psychological condition that caused her to fabricate increasingly extreme lies, including illnesses and entire details from her childhood. (In junior high she scores an invite to the popular girl’s party by claiming that she is dying of cancer, and later she feigns seizures to solicit the pity of nurses.)

The production captures completely the book’s feel of surrealism through such aspects as the fact that for part of the production it has three actors (Charise Greene, Nathan Richard Wagner, and Sonia Villani) all playing Lauren's mother to depict her largeness in the family and her over-the-top personality. Lauren narrates, “My mother was very big and my father was very small.” Lauren describes her mother’s habit of telling lies to make herself seem more important than she is, a habit that Lauren is quick to replicate. Lauren promises the audience that despite her habit of lying she will tell her story “as truthfully as I know how.” Here, Ranville breaks character and tells the audience that in all honesty she is not even Lauren, she is Jessica pretending to be Lauren, showing us how acting is, in a sense, like lying.

When Lauren describes the strangely intense scents that accompany the onset of her epileptic seizures, an actor grates an orange over the fan so that we too experience her reoccurring smell of oranges. This will happen again and again throughout the production, evoking such scenes as the harsh sterility of a hospital operating room. As Lauren’s seizures worsen she is sent to a Catholic school where the nuns teach her how to fall with grace.

Interspersed within the scenes are laughable and intentionally dramatic dance numbers set to '80s pop songs that emphasize the dreaminess and over-the-top imaginings of Lauren’s mind. Much like her mother, she imagines herself to be the star of every scene. As the production comes along the stage soon splits in two, symbolizing the procedure Lauren has to correct her epilepsy, which splits the two hemispheres of her brain, as well as the divide between the lies and the truth.

The production is surprisingly hilarious, given the heavy handed subject matter. The delirious feel of the play allows us to remain detached from the sometimes dreary events that unfold, and the cast skillfully imbues each reaction with comedic effect, emphasized by the '80s dance numbers. Ranville, along with the cast, gives an amazing performance that covers the gamut from raw emotions to intentionally exaggerated bravado to the comedic. Charise Greene, Rich Brown, Sonia Villani, and Nathan Richard Wagner are all chameleon-like in their ability to become the many different characters encompassed within the production (all under the skillful guidance of Jessica Burr). They also tackle the physical demands of such an unusually staged production: hanging from rafters, having acrobatic sex in corners, and slipping in and out of dance numbers.

Neal Wilkinson’s unusual scenic design suits the production’s surrealism and serves to emphasize the ever shifting sense of reality. The only flaw (if you can call it a flaw) is the lack of rootedness in the play due to the fact that so much of it turns out to be the author’s fabrication, as the full truth is never laid out we can never be sure what life experiences are being shown to us. But this is something many writers who transfer their real life experiences to the page and to the stage do; misremember, revise, and rewrite the scenes that comprise their lives. Giving us more of Lauren Slater’s exposed truth might have rooted this production further, but as is, it is a fever dream of a troubled youth misremembered and rewritten.