A limited number of Sunday tickets are available for $20. 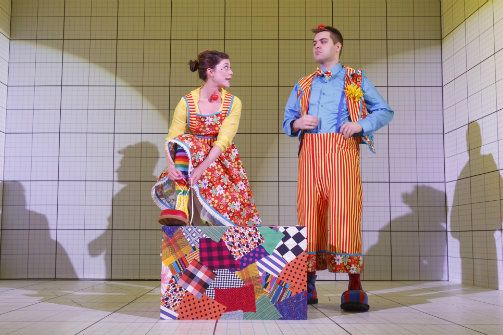 Susannah Flood and Nate Miller in Love and Information. Photo by Joan Marcus.

BOTTOM LINE: A tight ensemble of 15 actors navigates the treacherous terrain of love and memory in the Age of Information.

One of the greatest living playwrights of the English language is back in New York with a new play that is about exactly what it says, Love and Information. I would stop short of calling the piece a domestic, romantic comedy, but it’s probably as close to that genre as Caryl Churchill, author of Mad Forest, Cloud Nine, and Serious Money, is going to get.

Many of her familiar themes are present: the creeping effects of power -- represented here, for instance, by a couple of cavalier interrogators and by invisible census takers who may or may not exist -- and the chilling ways in which language can be used as a tool for manipulation and oppression. Churchill’s wolf is still at the door in this play. But here she shows, more hopefully than usual, how connecting with each other can often keep that wolf at bay.

Some of the most affecting scenes involve the loss of information. James Waterston portrays a man who, after insisting he doesn’t know how to play the piano, sits down and effortlessly plays a beautiful art song, then gives the impression that he, in a few moments, will forget it all again. And Randy Danson plays a haunting scene with John Procaccino in which two former lovers meet on a park bench, reminisce, and silently realize that not a single one of their memories overlap, despite their clearly intimate history.

James Macdonald, who helmed the world premiere at London’s Royal Court (and who is perhaps best known here for his 2008 Broadway revival of Churchill’s Top Girls), brings Love and Information to New York with a crack team of artists, onstage and off, and with impressively slick direction.

It’s not accurate to say that his two intermission-less hours go by in a flash. Macdonald does some judicious editing of optional material in Churchill’s script but could have further energized the evening with more streamlining. But he and his team still bring a dazzling touch to the staging. You’ll never quite understand, for instance, just how actors and set pieces manage to slip on and off of the tiny Minetta Lane stage during the complete blackouts that separate all those scenes. And the solid cast of 15 moves with ease through more than 100 roles.

Major kudos to the design team, as well, for helping to make this happen. The costume design by Gabriel Berry and Andrea Hood is particularly breathtaking. That isn’t to say that you’re sitting there focused on it; Berry and Hood’s vision quietly works its way into each scene, never overpowering it. Each costume -- here, an oddly menacing t-shirt of a kitten, there, some formal, yet slightly worn attire for a night at the opera -- manages to convey everything you need to know about a character in a few seconds, which is often how long a scene will last.

Even when called to make a bold statement, Berry and Hood manage to do so with graceful subtlety. In one section, a young woman (sharply played by Susannah Flood) offers some wild dream analysis that conveniently justifies an affair with a colleague (a charming Nate Miller). The fact that they’re engaging in this brief discussion while dressing up as party clowns is not at all hinted in the script. But it’s a wonderful moment, tipped to perfection just before the blackout as Miller adjusts a little clown hat onto his head at a hilariously undignified angle.

Miriam Buether’s set design is a three-sided cube with a clinically white graph-paper pattern, suggesting that the characters in each of these vignettes are our objects of study. It’s deceptively simple but works in tandem with Peter Mumford’s lighting and Christopher Shutt’s clever, sometimes disturbing sound clips (which frame each sequence) to keep those magical scene changes moving apace.

Macdonald’s actors are all excellent. Some speak their lines more clearly than others. But all are adept at switching from one scenario to the next, from such longtime stage veterans as Karen Kandel, Kellie Overbey, and Maria Tucci, to younger faces like Noah Galvin and Adante Power.

(Love and Information plays at the Minetta Lane Theatre, 18 Minetta Lane, through April 6, 2014. Performances are Tuesdays and Wednesdays at 7PM; Thursdays and Fridays at 8PM; Saturdays at 3PM and 8PM; and Sundays at 2PM and 7PM. Tickets are $65-$85. A limited number of Sunday tickets are available for $20. Student tickets: $25. To purchase tickets visit nytw.org or by call 800-982-2787.)