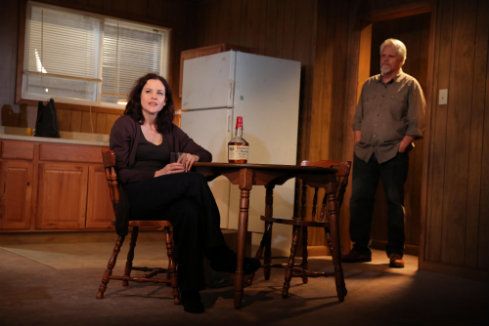 Ally Sheedy and Brian Lally in The Long Shrift. Photo by Joan Marcus.

BOTTOM LINE: Expert direction by James Franco and some strong acting are not enough to make this overly melodramatic play work.

First, let’s just come out and say that James Franco is quite a skillful over-achiever. As someone who could easily coast by on his talent and good looks, making light comedies with Seth Rogen and company, Franco somehow finds time between film acting gigs to publish poems and short stories; teach at several different schools at a time; and direct features, documentaries, and dance-theater pieces, all while earning multiple graduate degrees. This season, he’s additionally starring in a solid Broadway revival of John Steinbeck’s Of Mice and Men, in which he easily holds his own with an excellent ensemble. And he is now making a credible off Broadway debut as the director of The Long Shrift, a difficult play written by the novelist Robert Boswell.

What makes the new play most challenging is that Boswell’s admirable attempt to write a provocative and multilayered work about an emotionally charged situation -- a young man named Richard (Scott Haze) spends several years in prison on a conviction of rape and later comes involuntarily face to face with his accuser (Ahna O’Reilly) -- results in a predictable, overly melodramatic piece with underwritten characters, specifically the three played by women. Boswell knows enough about dramatic structure to build momentum within his scenes. And Franco is very good at loosening and tightening the action as needed to sustain that tension over the 90-minute running time.

But the credibility of the plot stretches to a breaking point more than once. A mortifying speech at a high school reunion is allowed to go on far longer than is likely, under the circumstances. And the incident only happens in the first place because Macy (Allie Gallerani), the young organizer of the event, believes that spicing up the reunion program with Jerry Springer-like controversy will somehow help her earn a Fulbright Scholarship to Yale. (?) At another point, two characters spend an unbelievable amount of time offstage for what should be a quick change of clothes -- conveniently long enough for a sinister moment to occur onstage between Richard and Macy. Gallerani does the best she can here with a shallow and, frankly, offensive stereotype.

Of course, we’re supposed to be provoked by Macy's comments -- as when she, more than once, hurls an astonishing barb at O’Reilly’s character -- as well as by the debate on the entangled politics of sex, love, and trust in scene one between Richard’s parents (powerfully played by Brian Lally and Franco’s fellow film star/author/teacher, Ally Sheedy). But one of the crucial missing elements to The Last Shrift is just one fully dimensional female character that could contribute to making this a smarter, more balanced play of ideas. There’s a lot to be discussed in the wake of unsettling rape-related cases in the news, like that of NFL linebacker Brian Banks, whose accuser recanted only after he had served five years in prison, or, in another story, the Lynnwood, Washington teenager who was pressured to withdraw her charges only to have the police discover, later, that she was, in fact, telling the truth. This play could use more of that real-world complexity. Sheedy does wonders infusing the mother, Sarah, with humanity, but the playwright stacks the deck against her and some of the other characters.

The role of Henry, the father, on the other hand, is quite subtle and rich, especially in the extremely capable hands of Lally, who like Haze and O’Reilly, is making his off-Broadway debut. Lally has a great sense of naturalism, which could almost be mistaken for non-acting except that his vocal and emotional expressiveness comes bursting out just when the play calls for it. “You inhabit chaos,” Sarah says, accusingly, of Henry. “You create it and wallow in it.” It’s the kind of character description that could lead to excruciating actor choices in lesser hands. But Lally knows exactly what he is doing.

Haze and O’Reilly are fine, too, although Haze needs to sharpen his vocal enunciation just a notch. And the set and lighting designs by Andromache Chalfant and Burke Brown, respectively, are very effective at creating an environment of stifling banality without overemphasizing the point (although some of the dialogue does that instead).

But, overall, Franco and his creative team have created an expertly realistic vision for this piece. The question is, do Boswell’s inconsistently drawn characters and overcooked symbolism -- including a somewhat tortured explanation of the play’s title -- lend themselves to a more stylized mise-en-scène?

(The Long Shrift plays at Rattlestick Playwrights Theater, 224 Waverly Place, through August 23, 2014. Performances are Sundays through Tuesdays at 7PM; Wednesdays through Fridays at 8PM; and Saturdays at 3PM and 8PM. Tickets are $20 for general admission, $30 for premium seating, and $5 for students, and are available at ovationtix.com or by calling 866.811.4111.)