The Loneliness of the Long Distance Runner

By Roy Williams; Adapted from the short story by Alan Sillitoe; Directed by Leah C. Gardiner 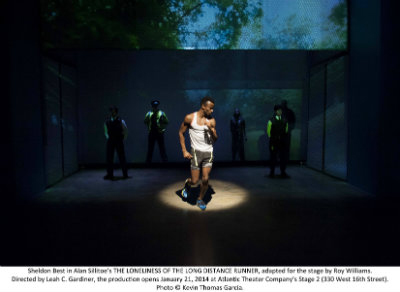 Sheldon Best in THE LONELINESS OF THE LONG DISTANCE RUNNER. Photo by Kevin Thomas Garcia

BOTTOM LINE: A spirited performance by Sheldon Best, the use of multimedia, and an engaging script help to make this production a unique and compelling one.

"The Loneliness of the Long Distance Runner,” a short story by Alan Sillitoe, was first published in 1959 and was turned into a movie two years later. Now, more than 50 years later, its subject matter of disaffected and directionless youth is still just as relevant. British playwright Roy Williams cleverly adapted the short story to reflect contemporary life in Britain. He updates the story by centering it on the 2011 London riots when many stores were broken into and robbed by violent mobs, mainly youths who were frustrated by issues related to the floundering economy. In a televised speech Prime Minister David Cameron vowed to charge anyone caught responsible for these crimes, creating harsh penalties for those who committed theft and vandalism, even outside of the riots. Director Leah C. Gardiner has this speech projected multiple times against the stage. In one scene it is shown to be on the television and the characters mute the speech and comment on it, showing how jaded they are towards their own country. Williams also changed the race of the youth in question from white to black; this, and the fact that some of the characters use patois, suggest that their feeling of being outsiders now stems past issues of class and also into issues related to race and culture.

The play opens with 17-year-old Colin (Sheldon Best) running in a long distance race; around him are the faces of the people he is thinking of as he runs. Through non-chronological flashbacks we see Colin on his first day as an inmate at an institution for young offenders. Colin has been sentenced here for breaking and entering a bakery and stealing the cash box. He fights off the violent bullies but finds he is being looked out for by Stevens (Todd Weeks), a social worker who wants Colin to compete in a long distance race so that he can change the perception people have of those in the institution. Stevens allows Colin to leave the grounds of the institution to practice running, at first with a guard, and then on his own. Through further flashbacks we see more about how Colin got to where he is. After leaving high school Colin had few prospects in regards to actual employment so he and his friend Jase (Joshua E. Nelson) spend their time breaking into cars and going on joy rides. He tries to avoid being home where he has to interact with his newly widowed mother (Zainab Jah) who busies herself spending all of his father’s insurance money and bringing home new boyfriends. One day when Jase confesses he broke the windows to a bakery during the riots, Colin is inspired to rob the place and finds himself locked up.

Sheldon Best gives a spirited performance as Colin; his infectious energy makes him the focus of every scene. (This level of energy is impressive considering he also spends most of the play running.) Joshua E. Nelson is also quite likable as Sheldon’s jovial friend. Zainab Jah shows a lot of bitterness and guilt in her character through her performance, which is more quiet and nuanced compared to that of the other actors.

Director Leah C. Gardiner and set designer Lauren Halpern help to make this script more engaging by utilizing video footage, projected images, and creative staging arrangements. All of this helps to make the story feel fresh and timely, which echoes the tone set by Williams. In the end, this story, despite having been penned more than 50 years ago feels very representative of the current times when economic inequalities only seem to be worsening, both here and across the pond. The Loneliess of The Long Distance Runner presents a strong message, especially when it shows Colin deciding on his own “course in life.”