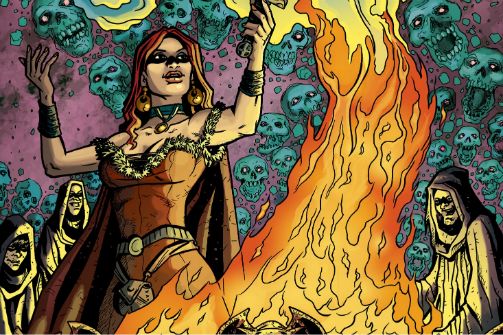 BOTTOM LINE: A graphic novel-inspired tale that explores alternate Shakespearean realities and pits some of his greatest heroes and villains against one another in an epic battle to save or kill Shakespeare.

If you are looking for something to do tonight or tomorrow evening that is a little out of the ordinary, consider checking out Gideon Productions reading of Kill Shakespeare. Staged as a radio play accompanied with real time comic book projections, Kill Shakespeare sends some of the Bard's greatest heroes -- including Hamlet, Juliet, Othello, Falstaff, and Romeo -- on an epic journey to find the reclusive wizard named William Shakespeare who just might turn the tides against the infamous villains Richard III, Lady MacBeth, and Iago.

With live music expertly supplied by Neimah Djourabchi and Brian Silliman; on-stage sound effects seamlessly led by Daryl Lathon; and large projections of Andy Belanger's kick-ass comic book panels, Kill Shakepeare is a loving fan fiction take on an alternate Shakespearean world where Romeo, Juliet, and Hamlet didn't die and a violent cavalcade of pissed off Shakespearean super villains and their minions set off on a bloody conquest to destroy their creator and gain complete control of their world.

Kill Shakespeare is an acclaimed comic book series that premiered in 2010 and has been profiled by The New York Times, Washington Post, and BBC to name a few. The current incarnation, produced by Gideon Productions, is one over a dozen productions of this inventive work which began in Toronto and has been seen everywhere from New York to Dubai. If you're a bit of a theatre geek and love "Lord of the Rings," "Game of Thrones," "Justice League of America," or "Agents of S.H.I.E.L.D," you will kick yourself if you don't get tickets for one of the remaining performances of Kill Shakespeare. It is an inventive story for the comic book or sci-fi fan in all of us, peppered with well placed Shakespearean inside jokes, that provides an action packed 75 minutes of bloody fun.

(Kill Shakespeare plays at HERE, 145 Sixth Avenue, through March 5, 2014. Performances are at 7PM; Tickets are $15. To purchase tickets visit www.here.org or call 212.352.3101. For more information about the comic book, Kill Shakespeare visit www.killshakespeare.com.)