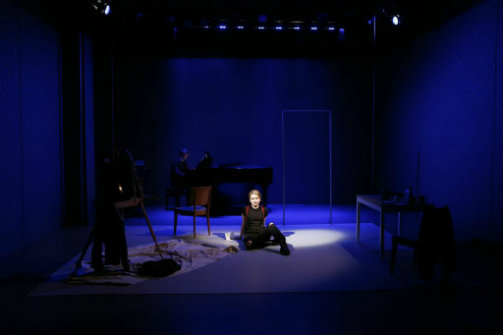 Phoebe Strole in The Other Room. Photo by Carol Rosegg.

The two original musicals being presented as this season’s offerings in the biannual Inner Voices series, which features original solo shows by new composer and playwright teams, are not exactly what you’d call a laugh a minute. Both feature women on the verge of loosing something they once took for granted and fighting the urge to get a jump-start on the grief that will follow. They are faced with the difficult task of reconciling the fearless women they once were with the fearful state in which they now find themselves. Both pieces are sad, heartbreaking even; yet remarkably manage to carry these brave women (and the audience) into the future with not only a deep sense of the fleetingness of life, but with the courage to face it. Rarely does musical theatre offer such profound and resonant insights into the human condition. There’s little gloss here and even less toe-tapping, but the skillful, natural, and delicate presentation of these two new musicals prove that substance is far more rewarding than show.

In Grace Andrea Frierson plays the respected and egotistical novelist Grace Monroe. When faced with a life-altering medical diagnosis, she sings her way through the first four stages of grief and emerges with an acceptance of her own mortality. The bluesy score by Kirsten Childs easily traverses the rocky emotional terrain without ever feeling trite or showy. It’s as if Ms. Monroe were singing along to the radio that just so happens to be playing all her favorite tunes. Featuring a warm and relatable book by Charlayne Woodard and classy/sassy direction (that befits its subject) by Shirley Jo Finney, Grace more than lives up to its title.

The Other Room, by Mark Campbell with music by Marisa Michelson, finds Lena (sung with youthful gusto by Phoebe Strole) tasked with assisting in the suicide of a sick friend in the midst of the AIDS crisis. With a raw pop-leaning score and directed in a confrontational style by Ethan Heard, the piece might be less hopeful than Grace, but for anyone who has ever fought, lost, and forged ahead, it packs a mighty emotional wallop.

There is nothing somber or morose in this cycle of Inner Voices, but there is something refreshing in the accessible sadness that both Grace and The Other Room have to offer. Musical theatre has a tendency to allow its audience to take it in from a cool distance. This is not the case here and I, for one, welcome the invitation to feel.