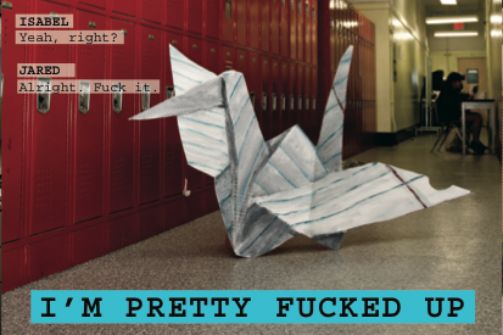 BOTTOM LINE: An astute look at adolescence that's particularly nostalgic for anyone who attended high school in the late '90s.

Ah the polarity of adolescence. It can be totally awesome, like when you're ditching class to smoke weed on a beautiful day with your friends. Or it can be quite the opposite, like when you're locked in a classroom while a school shooter roams loose on the campus grounds. Ariel Strauss explores this dichotomy in I'm Pretty Fucked Up.

I'm a big fan of Clubbed Thumb's Summerworks series. Their productions are extremely quirky, but always because they are unapologetically human. I'm Pretty Fucked Up puts high school under the lens, and it does so to great comic effect. With a soundtrack that includes Oasis and Bob Dylan (with a pre-show set list including Bush and Gin Blossoms) those who came of age in a world of flip phones will feel right at home.

Evoking teenage stoner movies like Dazed and Confused and Garden State, I'm Pretty Fucked Up follows three friends who ditch school early in the day to drive around smoking pot. Isabel (Lauren Annunziata), Jared (Ben Hollandsworth), and Dan (Seth Clayton) are also high on life. They talk about their hookups, devour Taco Bell, and feel utterly invincible. They recall that unbridled joy and optimism that only someone years removed from adolescence can truly understand. Ugh, it really WAS so easy then.

Back at the school, a security guard (Danny Wolohan) leaps into action when the lockdown alarm is sounded. Reports of a shooter on campus send everyone into a tizzy, including his crush, the school's Spanish teacher (Ana Nogueria). In her classroom, under the desk for safety, are indifferent students and brand-new couple June (Bonnie White) and Bobby (Alexander Flores). While tears stream down their teacher's face and the security guard's PTSD from a previous school shooting gives him action-hero adrenaline, June and Bobby seem rather unfazed, happy instead to just be in each other's presence.

As the play bounces from the car to the classroom, from joyride to nightmare, a picture of adolescence begins to emerge. Dangerous behavior pervades both scenarios (the kids are reckless and the adults are trapped), and when the violence is over, the bumbling principal (Colleen Werthmann) addresses the school, admitting that it was all handled pretty poorly from the administration's end. It appears that everyone was pretty fucked indeed.

I'm Pretty Fucked Up maintains a suspenseful through-line, what with a trigger-happy security guard looking for vengeance from last year's shooting, and ample use of smoke and explosions to signify the impending danger on campus. That said, the production walks the line between thriller and satire: it's very much a comedy and any subsequent fear is confined strictly to the stage. Director Kip Fagan maintains a light tone which makes the adults' reactions seem overblown by comparison. Even the violent offenders don't seem particularly effusive. Yet, it's the security guard's story, and Wolohan steals the show with his amped-up commitment to his job.

The play packs in a lot of points of view, and not always with adequate explanation to streamline the narrative. The plot gets mired in its nostalgia, and while insanely entertaining for those in the right demographic, it sometimes does so at the expense of clarifying the action (as an example, the previous school shooting responsible for the security guard's PTSD gets way more exposition than the events of this particular day ever do). But at a tight 80 minutes, this quick paced comedy will transport you right back to high school, and remind you just how remarkable it is that anyone makes it out alive. And this incredibly likable cast will make you feel like you're back home in suburban wherever-you're-from.