Off Off Broadway, New Play
Runs through 8.23.14
The Celebration of Whimsy, 21 Clinton Street 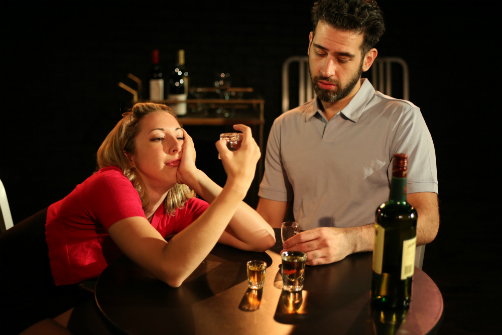 Nicole DiMattei and Andy Gershenzon in I Feed You. Photo by Dixie Sheridan.

BOTTOM LINE: Romantic comedies are such a silly genre, but this one also has a rather atypical ending.

Olive (Nicole DiMattei) works at I Feed You, a restaurant in New York. Actually, she co-owns it with her long time friend Ryan (Andy Gershenzon) who invested a quarter of a million dollars into their business after meeting Olive during a school project. There you have your pretty yet oblivious protagonist and her odd yet adorable friend. Granted, if Ryan ever did anything about his feelings for her (since they come so close to kissing multiple times) they might actually have a chance at something amazing. Obsessed with romantic comedies though, Olive is simply trying to go along with the fantastical script she came up with for her life a long time ago.

While Olive's plans are not yet coming to fruition, her self-centered valley-girl of a best friend, Lolli (Ashley Blasland), has everything figured out as she becomes engaged. With threats of jeopardizing the bachelor party Lolli convinces her fiancé's best man, Jon (Frank Monteleone), to go on a blind date with Olive. Of course Jon turns out to be the man Olive was drooling over the day before. (Funny how that works.) Once striking up a conversation Olive discovers there might not be more to Jon than his body, but convinces herself to stop judging him. Living in the moment is the goal, and there are a good number of possible outcomes depending on what Olive decides will be the best for her love life, her restaurant, and her own well being.

With Team Jon and Team Ryan I Feed You could easily be at the top of your Netflix suggestion list if you just finished watching You've Got Mail or As Good as it Gets. Audience participation is involved a couple times and between the sarcasm, addressing the audience, and the larger than life characters this show has a pretty good thing going. Personally I found Gershenzon to be the best part of the production, so I am Team Ryan all the way. Granted, I was swayed each time Monteleone had his shirt off.

Olive uses her power as the storyteller to pause and fast forward the show's scenes. So though they start with a chase scene, the plot rewinds so we can observe how Olive gets to where she is today. A general construct, but still clever. You probably have some questions now: Will Ryan stay in the friend zone? Does Olive have sex with the sexy vegan model? Is there at least a 10 minute stretch of time where Lolli isn't completely vapid? Take a load off your feet and watch some sexy sculpted abs. This show could probably even get a smile out of Oscar the Grouch.

(I Feed You plays at The Celebration of Whimsy, 21 Clinton Street, through August 23, 2014. The remaining performance is Saturday 8/23 at 7PM. Tickets are $18 and are available at fringenyc.org. For more show info visit ifeedyou.org.)