I Could Say More

Written and Directed by Chuck Blasius
Produced by Other Side Productions 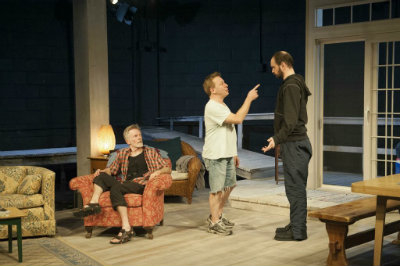 BOTTOM LINE: A new and original play about the rivalries and conflicts between family and old friends.

When will we learn that old friends, an endless flow of alcohol, and a cozy and removed vacation home are a recipe for disaster? Despite its title, I Could Say More is a play about people who say too much, and the hijinks and harm that ensues. Presented by Other Side Productions at the Hudson Guild Theatre, this ambitious new comedy offers a modern and clever portrayal of mid-life crises and complicated relationships amongst a group of old and new friends.

Set in present day in a Long Island beach house, Carl (Chuck Blasius, also the play’s writer and director) is playing host to family and friends for what is intended to be a relaxing and fun-filled vacation from the city. Tensions between Carl and his husband Drew (Brett Douglas) are thinly masked, clearly exacerbated by the presence of Drew’s questionably alcoholic brother Phil (Grant James Varjas) and his new younger boyfriend, Dyson (Frank Delessio). Also joining them are Carl and Drew’s teenage son Jason (Brandon Smalls), and Skip and Rakel (Keith McDermott and Monique Vukovic), a married couple and family friends trying to stay strong while Rakel battles breast cancer. The arrival of Lila (Kate Hodge) and her new married boyfriend Joe (Robert Gomes) add a new dynamic to the mix while the alcoholic beverages keep flowing and inhibitions disappear.

Playwright Blasius has a skill for creating fully believable and multi-dimensional characters, and the two-hour and twenty-minute play offers a full exploration of many complex and interesting personalities. The dialogue is sharp and honest, with plenty of humor and well-executed, delightfully cringe-worthy moments of conflict. Blasius is uniquely successful at creating depth and diversity amongst the characters, particularly in the representation of gay relationships and families. Whereas many contemporary plays still rely on stereotypes and overused tropes in writing gay characters, I Could Say More provides a refreshingly modern representation of sexuality in which there is no ‘normal,’ and those who haven’t caught up with the times are seen as backwards.

Excellent performances all-around make for a strong ensemble that carries this show to its full potential. But the play is not without its weaknesses — pacing issues cause some sections to drag, and while the characters are each intricately developed with their own insecurities and baggage, the overload of personal journeys sometimes muddy the overall structure and focus of the piece. Perhaps in an attempt to be realistic, separate pieces of dialogue between different guests often overlap in a way that is confusing and distracting. The final twenty minutes are particularly problematic, with a breakdown that feels a bit contrived and the momentum slowing to a sluggish pace. Overall, however, the writing is uniquely loyal to reality — just as real life rarely sees all loose ends tied together with a bow, the play is more consistent with that trajectory and often succeeds in representing the world with such a lens.

There is much to admire about I Could Say More, and huge credit is due to Chuck Blasius for writing, directing, and performing the new play. Scenic design by Clifton Chadick creates the perfect setting, and witnessing new, original work — that comes with more than a few laughs — always makes for a fulfilling evening at the theatre.

(I Could Say More plays at the Hudson Guild Theatre, 441 West 26th Street, through February 1, 2014. Performances are Thursdays through Saturdays at 8PM; Sundays at 7PM; with one Monday performance on January 27th at 8PM. Tickets are $18 and are available at ovationtix.com or by calling 866-811-4111.)