I Am The Wind 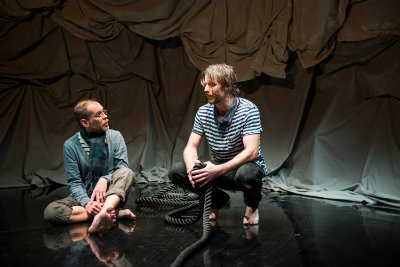 Louis Butelli and Christopher Tierney in I AM THE WIND. Photo by Cherylynn Tsushima.

Jon Fosse is one of the most lauded European playwrights who you may have never heard of. A Norwegian writer, his novels, plays, poetry and essays have been translated into more than forty languages. His plays have not been as much of a hit in the English-speaking world. With the US premiere of I Am The Wind, translated by Simon Stephens, there are clues abounding as to why he is considered one of the greatest living writers (by the Daily Telegraph), and also why his plays have had a hard time finding a home in the American dramatic repertoire. With ambiguities at every turn, Wind is a tough sell even with moments of poignant and haunting poetry. The ponderings of human mortality come off as juvenile even while the structure of the play exhibits mastery.

“I turn into a rock, and it gets, the rock gets heavier and heavier. I get so heavy that I can barely move. So heavy that I sink.” Nearly every line in this sixty minute philosophical journey is about the vague and about the overtly metaphoric. Even the names of the characters are meant to keep you in the dark, while also being overtly simple: The One (Christopher Tierney) and The Other (Louis Butelli). Similarly, the setting is a place that is nowhere and everywhere at once. We do know that there is most definitely a boat, an ocean and a cove -- even if they are metaphoric. The One is feeling burdened by the weight of life, while The Other is baffled by The One’s discontent. In spite of The Other’s fears, The One steers the boat straight out into the open ocean. Butelli's fear is palpable next to Tierney's coolness in the climactic moments of the play. In spite of constant reassurance, The One’s fate is known and predestined from the beginning -- in fact it's in the title.

While we never know exactly who these men are, what they’re doing or why they’re doing it -- the basic plot is remarkably easy to follow (if you care about things like plot, which Fosse rightfully appears adverse to). The circuitous conversations about life and death quickly become tiresome. Like a boat lost in the fog though, it often is Fosse’s intention to leave the audience asking, “Haven’t we been here before?” Under Paul Takacs’ direction, the two men have an erotic connection which adds a complexity to their relationship. Still Takacs struggles with shaping Fosse’s script into a journey of highs and lows. Too much reliance is put on the minimalism of the design and sparseness of the text to carry the play -- this only allows Tierney and Butelli to play about two levels throughout repeatedly.

Tierney is perhaps most famous as the actor/dancer who was injured during the preview period for Spider-Man Turn Off the Dark. Thankfully he appears to be back in fine form. Here is hoping that he will continue to do excellent work as an actor and dancer that will surpass that footnote. As The One, he utilizes his agility with Katherine Helen Fisher’s economic movement design. Tierney and Butelli define the space and surroundings through the choreography. Steven C. Kemp’s minimalistic scenic design consists of grey curtains and a heavy black rope (which transforms into other objects as needed). Nick Solyom smartly breaks up the space geometrically with his lighting to provide borders in an empty space.

Samuel Beckett crosses the mind every now and again while watching I Am The Wind. However, Fosse will not leave you with as much hope as Beckett. What he does similarly though is create verbose dialogue without tangible reference points. He also manages to connect resurfacing words throughout the play like a road map. It could be Stephens’ translation, but the word choices ring more often as base and whiny to our ears. With a little more sophistication in language, and more guidance through the fog by Takacs it might be a littler clearer as to why the Scandinavians continue to celebrate and produce Fosse’s work.