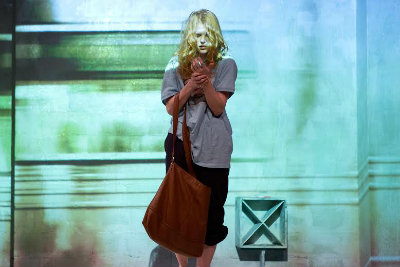 Leslie Shires in THE GIN BABY. Photo by Hunter Canning.

BOTTOM LINE: This glimpse into a troubled mind is loud, dark and spiteful.

The title of Sarah Shaefer’s new play may sound like a boozy dark comedy with the qualities of Edward Albee, but The Gin Baby is not about blunt wittiness -- instead it’s a spiral into a darkness that is not fun to watch, nor is it meant to be. Brought to the stage by Kid Brooklyn and Mermaid Sand Productions, Shaefer explores the psychosis and self-destruction of alcoholism mixed with personality disorder. Directed stylishly by Daniel Talbott, this production delves deeper and deeper into the psyche of its main character, Amelia (Lesley Shires), and never returns to the light of the opening seconds of the play (the house lights are literally up for the first scene).

The volume of the play is turned up to eleven about 15 minutes in, and never lowers until the final 30 seconds. While most anyone with even a pedestrian knowledge of addiction and personality disorder will learn little new information, the production qualities make up for some shortfalls in the structure of Shaefer’s brave, yet developing script. The story is entirely centered on Ameila, but her character fails to keep us invested on her own. The characters on the periphery are actually equally interesting and could add texture, but are underdeveloped and serve strictly as utilitarian roles to Amelia’s journey.

Amelia is a struggling off Broadway actress who is quick to play the sex card in an audition. After a bad audition, we soon find out she is willing to trade sex for most things she wants, especially alcohol (Beefeater gin only at first, until her standards lower). Shaefer throws in a very funny scene early on with Amelia and an old schoolmate (Charlotte Graham) has since had more luck than her in acting. When Graham’s character states ignorance about who Will Eno is despite being offered a role in his play, the audience of industry-wise theatergoers reveled at the inside humor.

There are some textbook psychological red flags with Amelia early on suggesting she may not put a lot of value in herself, and refuses to allow anyone else to value her either. This includes the charming bartender/actor Asa (Chris Stack) and her ex-boyfriend Dave (Maxwell Hamilton). Shires and Hamilton share a disturbing brawl that ends in an uncomfortable forced sexual act.

After a near suicide on a subway track, Amelia eventually lands in an NYU mental health facility and meets Ellen (Jenny Seastone Stern). Ellen’s extreme neuroses and personality shifts at first tick Amelia off, but they quickly grow fond of each other. One of the most lovely and real scenes of the play comes when Ellen explains a comic she’s drawn detailing all that she and her parents will do out on the town in New York when they come visit her. Amelia is touched and uncontrollably smashes what she finds overly sympathetic. Amelia begins to find strength in her own compassion for Ellen. Jelena Stupljanin plays Dr. Ty, who offers tough love but, as drawn by Shaefer, very little constructive care.

Some symptoms of the characters play out too “on the nose” to the point that we might be watching a psychology class role play (with some extremely talented and committed actors). Stern is remarkable though with the mercurial shifts in her character’s psychology. As Ellen, she finds a diversity of levels that the rest of the cast struggles with -- in part due to their roles being strictly in service to Amelia’s journey.

Janie Bullard’s sound design and Kaitlyn Pietras’ projection design both bring much needed nuance to the play. As incorporated alongside Talbott’s slick staging and Kia Rogers’ precise lighting, they make a world out of the rustic IRT Theatre that we can escape into when the script becomes overly relentless. What Shaefer does bring us is a glimpse into a dark place that exists sadly for numerous people. The structure is similar to driving into a cave with no exit. While I appreciate that she insists on showing us this darkness in such a straightforward manner, in a play we may need a little more sunlight for contrast.

(The Gin Game plays at IRT Theater, 154 Christopher Street, 3rd Floor, between Greenwich and Washington Streets, through February 2, 2014. Performances are Wednesdays through Sundays at 8PM. Tickets are $18 and are available at brownpapertickets.com or by calling 800.838.3006.)