Off Off Broadway, New Solo Show
Runs through 8.23.14
The Celebration of Whimsy, 21 Clinton Street 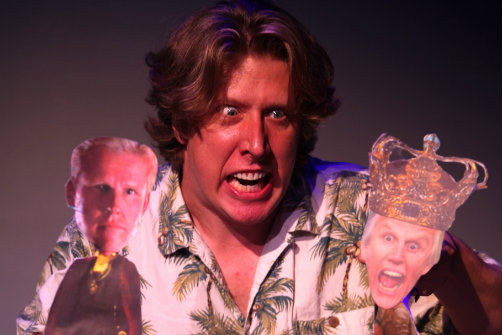 BOTTOM LINE: A funny, highly inventive take on the Bard as seen through the crazy eyes of Gary Busey.

Gary Busey popped my cherry. To be clear, that’s my Fringe Festival cherry, since it took me 18 years to see my first show at Fringe NYC. But Carl, inhabiting what’s left of the Academy Award-nominated actor’s brain, makes for a very worthwhile and memorable introduction in his multi-media show that incorporates finger puppets, paper dolls (with the heads of Gary Busey in assorted roles on them), and video as he acts out the play’s dozen characters.

Carl takes the stage dressed in shorts and a Hawaiian shirt and immediately works Busey’s famous toothy grin and bugged out eyes, setting the tone for the show. Breaking the fourth wall (although I’d guess for Busey there is no such thing) he says “Some of you may be asking why I’m doing Hamlet. To prove to you I still have the chops!” He introduces the characters using his collection of paper dolls, the most memorable of which is Horatio with a Buddy Holly topper, since Busey introduces Horatio every time with the line “Hamlet’s best and only friend.” Busey also plays, to hilarious effect, the Ghost of Hamlet’s father, in black ghoul makeup, via video.

As he makes his way through the five acts, Busey digresses frequently, channeling, at times, Jim Morrison singing “Five to One”, and a frenetic rendition of Buddy Holly’s “Everyday.” As he spies the alarm next to some of the finger puppets he has stashed he yells out “Fire!” Even when he seems to make a mistake - announcing “I will now play Polonius. No! I will now play Claudius!” – he gets big laughs. Certain scenes Busey deems “not essential” which aids in the breakneck pace fueled by Busey’s manic energy. Carl’s commitment to the portrayal is so fervent that in a spontaneous moment when he’s trying to find one of his dolls and gets an assist from the front row, he stays in character and tells his helper that “he’s an angel in a human suit.”

Judging by the sold out show and audience reaction, Carl has a sizable fan base, no doubt owing to his stint in the Off Off Broadway show Point Break Live! It’s well deserved, but even more impressive than his Busey is his ability to return to the text after all of the moments where he goes off script. My only criticism is that given all of the references in the play, an annotated guide would be handy. But whether you’re a first-timer at the fest like me or a seasoned veteran, you should not miss this inspired entry.