Off Off Broadway, New Play
Runs through 8.24.14
Teatro LATEA at the Clemente, 107 Suffolk Street 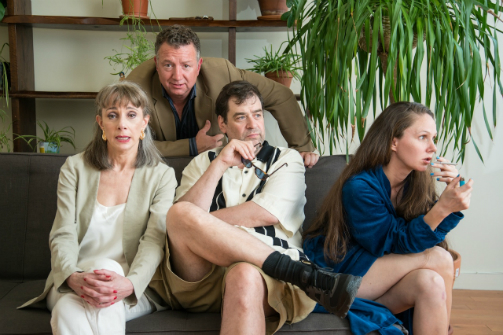 BOTTOM LINE: A family drama that goes in surprising directions and doesn't have much to do with soccer.

The tagline for Futebol is, "It's not really about soccer. Like, at all," so you can't accuse anyone of false advertising. You have to give the creators credit for capitalizing on the popularity of the sport. The logo and the title were enough to draw me in --  I'm a fan of the World Cup -- and once I realized it wasn't about soccer, I was intrigued enough to see it. The play takes place in São Paolo, Brazil during the World Cup and though most of the conversations could happen anywhere, there is some soccer talk and some characters even attend a match.

When the play begins, Rachel (playwright Eilis Cahill) is in bed and Alexander (director James Glossman) is trying to get her up for breakfast. It's hard to figure out their relationship at first, but we slowly find out that Rachel's writer father has just died and his close friends Alexander and Richard (Mike Boland), also writers, have come to bring her back to the United States. Why is Rachel in Brazil? Why didn't she go to the funeral? Why do Richard and Alexander care so much? These questions are addressed throughout and the answers are refreshingly hard to predict. Later, Rachel's step-mother Linda (Linda Setzer) shows up.

Linda writes popular 50 Shades of Grey-esque books and Rachel criticizes her for perpetuating the asshole with a heart of gold myth, but Linda counters that if Rachel thinks so highly of women, she shouldn't believe they could be brainwashed by a book. Futebol seems to tap into current events because of the World Cup angle, but the conversations about feminism and violence against women make it even more timely.

If you want as much action as a penalty shoot-out at the end of a soccer match, you might not get it here, but if you like plays with lots of talking that leave you with something to think about, it might be for you.