Concieved and Directed by Jeremy Aluma

Off Off Broadway, Play with Music
Runs through 6.1.14
The Club at LaMama, 74A East 4th Street 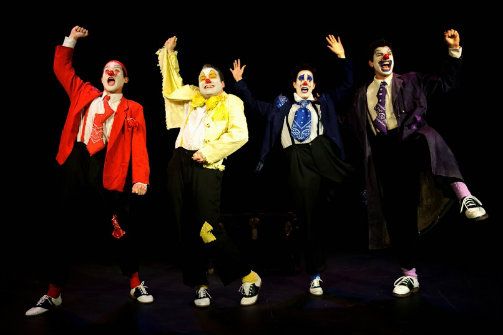 Clowns are scary, on that we are all agreed. Those pale, exaggerated faces are unnerving. What do they want from us? For us to laugh at their supposedly hilarious antics? Yes, but for what purpose? What are they really after? Even Nicky Paraiso, programming director of The Club at La Mama and a rational human being if ever there was one, admitted a past healthy innate fear of all things clown in his curtain speech this past weekend. Yet, here he was, introducing a show called Four Clowns, which would feature four clowns.

Shudder if you must. I know I did. At first.

Though clowns have rightfully earned their place in the collective nightmare fuel of the Western unconscious (to this day I cannot bring myself to watch It), the art of modern clownery extends beyond circus sideshow curiosities. The art of clowning has its roots in commedia del arte, and, as Paraiso explained, clowns can convey some of the purest stories of humanity. Clowns entertain, but clowns also feel. They wring laughter from some of the saddest and most enraging human experiences because sometimes laughter is the only answer.

Four Clowns features four clowns enacting the incredibly depressing tales of four disparate souls, from childhood to death. Topics covered in the evening include but are not limited to parental abuse, domestic violence, child molestation, and drug abuse. If that sounds harrowing, congratulations! You are a person with a conscious! Four Clowns is depressing as hell on paper, so why was the show itself so damn funny?

Let’s start with the clowns themselves, who are all incredibly engaged and likeable in their performances. Identified only as The Angry Clown (Raymond Lee), The Nervous Clown (Amir Levi), The Sad Clown (Alexis Jones) and The Mischievous Clown (Kevin Klein), each actor portrays a disadvantaged person through three “acts”: childhood, adolescence and adulthood. Each character faces differing adversities from birth all the way to death in scenes acted out with no-holds-barred comic brio. No topic is too taboo to be played for laughs; there is no tragedy that cannot be subverted and made hilarious. These highly committed, impossibly energetic clowns push each heartbreaking scenario as far as it will go.

It is impossible to pick a standout from the cast, as each performer brings the full range of their physicality and emotional expression to the table. What makes these clowns so engaging is the vulnerability they bring to their performances and the very palpable joy they have in entertaining. The clowns have an easy report with the audience: engaging them in irrelevant conversations, bringing them into the action of a scene, and properly shaming the one fool who dares to whip out a camera phone. Each actor is a skilled improviser and creates a safe space for audience interaction. The performance I attended was on a rainy Memorial Day weekend night and it is a testament to the skill and talent of the company that so many would spend such a night at a small upstairs theater.

Credit Jeremy Aluma, the creator and director of Four Clowns, who not only conceived of such a sublimely ridiculous and moving show but found the absolute best people to be in it. Credit Amir Khosrowpour for brilliantly and nimbly accompanying the show on the piano. Credit everyone and everything in bringing just the right elements together at the right time. Such a show does not happen by accident.

Four Clowns ends its East Coast premiere at LaMama on June 1st. Hopefully, they will return soon, but do not take the chance to miss out on this show. Get over your fear, at least for one night, and see Four Clowns.