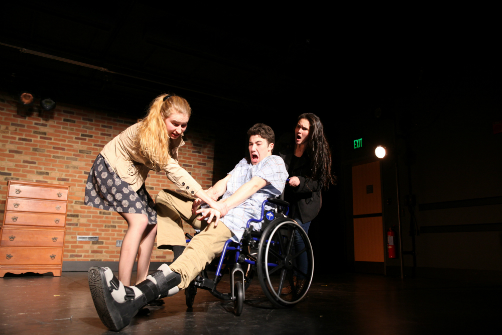 College graduation can put romantic relationships in a frightfully awkward limbo. Lovers who found commitment easy in the context of dorm rooms and frat parties question with agony whether their romantic bond is strong enough to sustain the grind of real life. “Happily ever after” suddenly becomes the most terrifying phrase in the English language.

This is the uncomfortable and hilarious conundrum at the heart of Jesse Schreck’s clever new play Fortuna Fantasia. Schreck invites us to marvel at this vexing dilemma by framing it in the context of a circus act. The central lovers, Claire and Jeffrey, played with honest simplicity by Chandler Rosenthal and Paul Hinkes, are introduced by the narrator -- an unnerving ringmaster with ostentatious energy, played by Jeremy Weiss. The Ringmaster informs us that the characters are merely puppets, unaware of our gaze and subject to our manipulation. He assures us that they will eventually live happily ever after and with that welcomes us to Fortuna Fantasia, as though we have just arrived at La Cage Aux Folles.

After Claire declines Jeffrey’s marriage proposal, citing that she is not ready, they break up and Jeffrey decides to move out. His departure is delayed by a broken foot on moving day, which subjects them to a mandatory, platonic cohabitation. Claire watches jealously as Jeffrey becomes involved with Kathleen (Juliana Canfield), an easy-to-bed beauty who turns out to be a psychopath. Jeffrey is likewise enraged by Claire’s latest partner, Thomas (Jacob Osborne), an eccentric Russian poet, who stares at Jeffrey as he sleeps and then opines that he is “a beautiful sleeper.” What ensues is Claire and Jeffrey’s journey back to one another through a series of ridiculous, if not unlikely, obstacles including a stint in prison for Claire and Jeffrey’s entire year as Kathleen’s hostage.

Schreck’s witty specificity makes this romantic comedy especially hilarious. Thomas, for example, is not just a creative writing major but specializes in Industrial Naturalism. The comedy is delivered gracefully by capable, young actors -- some of whom have yet to graduate from college -- who clearly trust the material and refrain from dressing its absurdity with histrionic phoniness. Nailah Harper-Malveaux’s direction enhances the circus conceit by allowing hand props to be tossed onstage from the wings and furniture pieces, like wheelchairs, to magically appear.

The action of the play grows frustratingly farfetched towards the end, but perhaps Schreck has given himself license to stray from believability by calling his play a fantasia. His dependence on implausibility is only disappointing because he proves himself to be better than that earlier in the evening. Still, the play explores real questions, in a funny and intelligent manner, that young adults face, and I suspect that it will continue to resonate with college-aged audiences in its next productions.

(Fortuna Fantasia plays at the Robert Moss Theater, 440 Lafayette Street, 3rd Floor, through August 24, 2014. Remaining performance is Sunday 8/24 at 1PM. Tickets are $18 and are available at fringenyc.org.)