For Body and Light 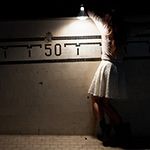 For Body and Light begins like a night at the campfire with the poet and musician, Ian Ferrier telling us a tale from his childhood and playing soft melodies. He mentions his cold emptiness pushed out by the brightness of the snow and light in his summer jobs up north and being out on a ship at sea. As he mentions the tidal surge, two female bodies rise and swell with the music and abstractly reflect his words. The natural elegance of their movement allows for peaceful symbiosis. From this point on, each of the five women break from the unison for different solos and duets. The movement feels like cursive handwriting stylizing the whole space near the floor. They all lay on the floor gently creating an ocean current in movement while Ferrier speaks of his marine adventures.

It felt like I was watching Little Women in dance as the five women interacted with each other. One woman holds another's head, and she vacillates between keeping control of the woman and being pulled along for the ride. The ambience of the sound and words are so dreamy that I longed for more conflict and resolution with the duets.

The lighting is very well executed in a low budget chic mode with one lamp nestled on the floor and then used as a floodlight swinging around the stage. At moments it feels like you are on a ship swaying in the middle of the night. In one of the most stunning sections, one woman palms the light with her hands and let herself be taken away with the rocking. Her arms remain locked on the fixture as her body is tumulted around the stage. Her face remains lit in by the lamp she holds. The other women flail themselves underneath it as they were flies avoiding a spider web. After this succession of falls to the floor, a lone woman remains in a rapturous solo, with light lowering down towards her as an ominous weight that crushes her into the floor.

Afterwards, that same woman gains control over the oppressing light and points it on two rubber boots filled with water. In keeping with the maritime feel of the piece, it seemed natural for water to appear onstage and another woman steps in as if they become her prison. For Body and Light is a versatile evening of inventive dance and lighting. Travail Rouge, is a relative newcomer to NYC and has quite a lineup of touring and shows in Canada. The dancers have gorgeous, fluid, spacious movement and I would love to see pushed it into a darker, aggressive place. Afterall, as the poet says when we are in so much light, we crave shadows. The work has a gentle simplicity that the NYC dance scene can use. I hope they are welcomed back soon.