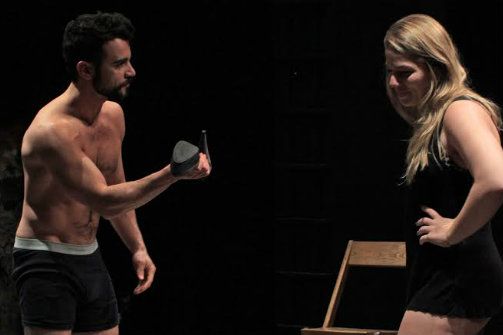 Creating reworked and modernized versions of fairy tales is certainly not a novel concept, but the redone fairy tales presented within the four short plays that comprise StrangeDog Theatre’s Enchanted Arms rehash age old fairy tales in a new way. Some show us where the story picks up after the happily ever after, and others take the themes present in the fairy tales and turn them into stories about our everyday lives, minus the magic.

In this modernized continuation of the Cinderella story, we find out that the Happily Ever After is not quite so happy for Ella (Brittany Sambogna) and Charles (Tony Knotts). Charles has lost The Kingdom Bar and Restaurant, the enterprise he inherited from his father which made him the most desirable bachelor in town. He and Ella live in a cluttered studio apartment which Ella will never bother to tidy up as she was traumatized after being made to clean endlessly by her evil stepmother Eva (Tracy Shar), and Charles promised her that she would never have to clean anything up ever again. Their day is rudely interrupted by a surprise visit from Eva and Ella’s stepsister Steph (Michelle Lupo). Now that Charles has lost his fortune and the two are flat broke Eva is dying to get them in her claws, and plans to reenslave Ella and get Charles paired up with one of her daughters. Ella and Charles are hoping Eva might give them a loan to aid them in rebuilding the lost fortune, but it becomes apparent soon enough that her motives are only selfish. When Eva forces Ella out of the house to buy her wine, Steph tries her hand at seducing Charles. She tells him that even though every single girl in town wanted him, she was the only one that wanted him “for him” and not for the wealth or prestige. Charles reveals that the spark between him and Ella has been gradually fading since the fateful night they met and the two exchange some passionate kisses.

This play’s moments of dramatic tension are effective thanks to strong performances from Brittany Sambogna and Tony Knotts. Tracy Shar’s over-the-top performance as the villainous step mother also provides some comic relief. Having seen several of Ben Clawson’s full length plays (Clawson also came up with the concept for Enchanted Arms), I found this play to not be up to the high level he usually is at with his fast paced scripts that are typically jam packed with witty dialogue. The script however, has its moments of poignancy when Ella and Charles try to recreate the magical chemistry that once sizzled between them.

In this modern reworking of Rapunzel, Zel (Shannon Sullivan) is an imprisoned sex slave whose “mother” locks her up and forces her into prostitution. By crafting a rope from her long hair she manages to climb down into the apartment below her which is inhabited by Mitch (Gary Martins) who is busy making meth, and has to cut Zel free from her makeshift rope. He hesitates to let Zel flee, worried that she might blow the whistle on his illegal activities, but soon he realizes that he has his own personal connection to Zel. Both Shannon Sullivan and Gary Martins make the most dramatic moments of this sad play believable and Sullivan shows skill at conveying emotional duress. However, the dark subject matter of this script seems a little too extreme, especially when it is sandwiched between plays that are much more light-hearted.

In this clever rehashing of “Three Little Pigs” Jon (Seth Michael) is at home watching soap operas and infomercials on baldness treatments while awaiting the arrival of an imminent hurricane. While Jon attempts to descend into mindlessness, his viewing is interrupted by answering machine messages from his friend who is torn up over a break up with his dominating girlfriend Tina (Michelle Lupo). Soon enough, Tina is at Jon’s door demanding to be let in as the trains have stopped running out of Manhattan and she is stuck without shelter as the hurricane approaches. While Tina bangs on the door another call comes in from another of Jon’s friends, who reveals that Tina was cheating on her boyfriend with him. Jon himself seems to have his own sexual interest/history with Tina as he begins to pleasure himself at the sound of her voice. As Tina bangs on the door and demands she be let in, it becomes apparent who the wolf in the story really is. Palestina’s script creates a surprising real world spin on this age old story, with a manipulative woman as an unexpected villain. The jokes in the script are maximized in their potential thanks to the direction of Artem Yatsunov and Seth Michael’s humorous delivery.

In this dramatic spin on (what I would assume is) “Rumpelstiltskin” Milla (Lee Ann Hoover) is a listless young writer who left graduate school to write a book. Her former professor Mankin (Dave Hoffman), who helped her score the book deal, shows up with a pizza to check on Milla’s progress. Milla, once one of Mankin’s star pupils, has not been able to finish the book, only creating a draft that she aknowledges is “very bad.” “What if I just don’t have any more in me?” she asks in tears. It is soon revealed that Milla is Mankin’s former lover, and this is partly what motivated Mankin to get her the book deal. He calmly tells Milla that he will take care of everything: he will take her subpar story and rewrite it. Knowing that this deal will have a catch, Milla peels off her shorts and offers herself to Mankin, asking if he has condoms. Mankin tells Milla to put back on her clothing as that is not the deal he has in mind. He tells Milla she is leaving with him and that she can leave her things behind as she is about to embark on a new life with him. Milla realizes that in order to be saved she will have to sacrifice her entire self and give herself fully to Mankin, becoming his forever. She offers to let him come over to her apartment and sleep with her whenever he wants, but Mankin makes it clear that he will only be satisfied when he possesses her fully. The tables turn however when it is discovered that lines from some of Mankin’s stories bear a striking resemblance to stories Milla penned in his classes. Playwright Stacie Lents shows much talent through her script which displays nuanced drama and moments of tense and revealing dialogue. Lee Ann Hoover displays an ability for dramatic acting as she gives a serious and authentic performance. Lents’ script takes the themes of possession and power struggles from the Rumpelstiltskin story and applies them to modern day life, creating a compelling production.