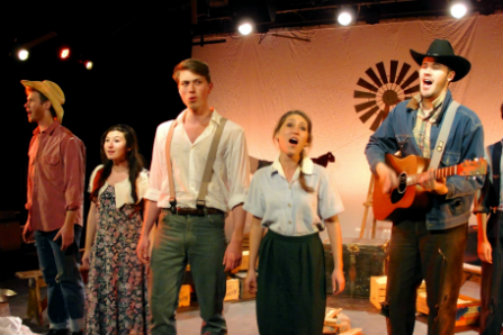 BOTTOM LINE: Hearty visions of Steinbeck and Rodgers & Hammerstein will envelope you as you breathe in the mystical dust of this exciting, new musical.

Dust Can’t Kill Me, a labor of love and conviction by a talented bunch of Yale students, is definitely a must-see. It has the musicality of a honky-tonk Western musical, a rich and twisty book, and a bold cast. By curtain call, the long journey home will have been worth it. Beginning the piece by breaking the fourth wall, Jack Omaha (Paul Hinkes, who also plays Montgomery, a Sheriff, and a bartender) introduces us to the world of Dust Bowl America and three communities who are whisked into the desert for “salvation” by a mysterious “Prophet." With the opening number, “Ten Years,” the cast sings as a unit, finding harmony in its collective devastation. The well-documented sojourn through the breadbasket plains in the 1930s is colored with fresh depth in this new piece.

The music, written by Elliah Heifetz and beautifully orchestrated by Max Gordon, is full, fun, and layered while its book by Abigail Carney weaves all seven lives with sincere equality. The first half is pleasant with songs like “The Larkspur Inn,” a traveling song through the desert, or "Adeline," a sweet ballad to an unborn child, but it’s in the second half when Heifetz’s score devastates us with selections like “It Gets Cold in California” and “The Ballad of the Moon Preacher.” In these selections, the book and music brighten our stalwart understanding of Dust Bowlers and in turn electrify the stage.

Hinkes sets the stage ablaze in his own right. As the Western troubadour he fits in all parts, but alarmingly withdraws from any intimacy. Hinkes has transforming qualities akin to Kevin Kline, morphing before your very eyes. His counterpart, the scarily deadpan Prophet, played by Michael Ruocco, is equally captivating. The cast is delightfully even: Alyssa Miller as Lily plays rigid and responsible to her flighty sister Angelina, played by Lily Shoretz; Shoretz also sings beautifully and is an anchor in all the ensemble pieces. You always look to her. The brothers Abraham and Birch are dizzyingly magnified by Chris Camp and Nathaniel Janis, respectively. Janis is a quiet storm on stage, while Camp plays a storm eventually quieted; both are truly wonderful in the roles. Rounding out the cast is the ignoble-turned-noble Wesley (Jamie Bogyo). Bogyo is a matinee idol and when he and Miller eventually get together, it's really satisfying.  Although Wesley has a rough past, Bogyo is more convincing as a lover. The understated and in-tune direction by Jacob Osborne is to thank for much of the beautiful cohesion onstage.

I feel an abundance of good will for this piece. In fact, my qualms with the show only occurred to me outside the theater. The show, at two and a half hours, is a bit long, and the finale falls flat despite the consistently mellifluous score. Still, I am confident this show has the chops for next steps like the O’Neill Conference and maybe even Broadway. The beauty of the Fringe is encountering those kind of shows with potential-- this is one. Go!