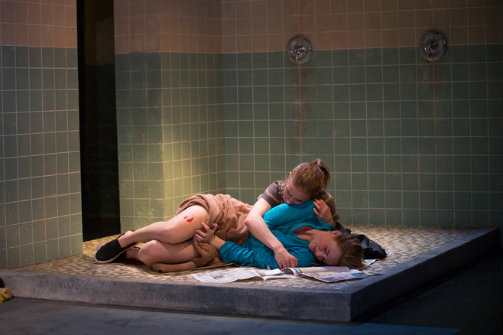 BOTTOM LINE: A thrilling and difficult new play, every inch filled with emotional integrity and a thrilling examination of the human side of politic discourse.

Colt Coeur proclaims that they create “theater that holds you tight and never lets go.” In just the right ways, Ruby Rae Spiegel’s play can’t resist a good deal of seat dancing as you squirm your way through repeated (literal) gut punching action, toxic locker room humor, and some blood effects that will remind you why you shouldn't eat at least an hour before going into the pool. If that isn’t enough to reel you in, Spiegel offers us a skillfully crafted narrative that covers all the teenage issue biggies that could easily steer their way into Glee territory. I’m happy to report that you won’t find that nonsense here.

Lights up. And the first gut punch begins. Soon we discover that Amy (Sarah Mezzanotte) is pregnant, in high school, by a boy she now shudders at the thought of. She has enlisted the help of friend Ester (Tina Ivlev) to abort the baby so that she does not have to tell her mother. She has read about the uncomfortably named “DIY abortion” techniques in a magazine that include detergent drinking, stomach sitting, and good-old-fashioned vodka. (And by the way, is this article an actual thing in this mind-boggling world?) Dry Land doesn’t allow us much time to come up for air as we hurdle our way through a story of friendship, love, and betrayal.

This is a strong ensemble across the board. Mezzanotte and Ivlev find the heart in Amy and Ester despite the acts of emotional and physical violence. It would be easy to discard these ladies with less empathic performances. Alice Kremelberg (friend and fellow swim teammate Reba) is a necessary departure from the depths of our story. Many props also to the designers, particularly scenic designer John McDermott and lighting designer Grant Yaeger, who fill the expansive upstairs space of HERE with locker room realness and a host of surprises.

You can probably guess that there’s little chance for a fairy tale ending to Dry Land. Nor do you want there to be one in this tricky, unfairly politic decision these kinds of stories must find. Though somehow Spiegel’s play manages to allow this question to be off center in focus and firmly placed on the many highs and lows of these girls’ relationships. There is, however, no question Amy wants “it” dead. To which Ester later asks Amy to please not say “it.”

Finally, director Adrienne Campbell-Holt must be commended as she has weaved us into this horrific play without judgment. And it’s her quieter moments that concoct a play rich with texture and substance. After the terror of the abortion scene, Campbell-Holt has expertly crafted a breath in the action where a seldom-seen, generically named Janitor (Jim Ireland) mops the floor of excrement and blood. It’s a tender, careful, and distanced action that suggests both the banality of an ongoing abortion struggle and those who will be there to help but only after the tough bits are done. But Ester will stay through the toughest times. For even when Amy demands that Ester let go of her hand she simply and boldly proclaims “no.” Just like the mission of Colt Coeur, she will not let go.