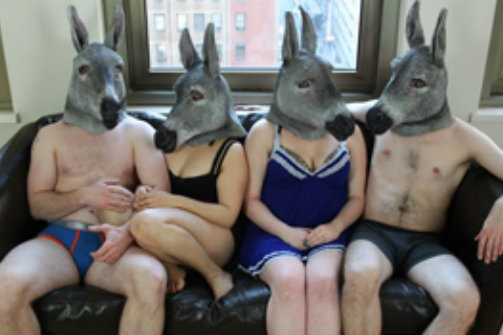 Sam is a prude. It’s obvious because she’s single and celibate, wears ill-fitting clothes, doesn’t cuss like a sailor, and has never been spanked in the bedroom. Meanwhile her bestie Kareena is just one of the guys. She knows her way around an F-bomb, drinks like a fish, has wild sex with strangers, dresses like she’s going to a middle school dance, and has one of those asymmetrical haircuts that demands near constant readjustment. They share a certain feminist gusto, but come at it from very different directions. Sam has a prickly mistrust of men and is quick to label as either good guy or bad, the latter category bearing the brunt of the weight. Kareena, on the other hand, has infiltrated the boys club with her bravura and then slept with each and every last one of them, seeming to suggest that female power stems from her sexuality and man’s inability to resist it.

When we first meet them, Kareena (Cleo Gray) is playing against type cohabitating with a nice, stable, and super handsome man named Teddy who is devoted and prone to monogamy. She’s happy, but the cracks are beginning to show, uncomfortable as she is with all things intimate. Sam is there too, just for a visit, lounging on the couch hating on her career and Kyle (Jon McCormick), a porno director Kareena met online and passed on to her friend thinking he could bring her out of her shell, so to speak. Kyle is currently directing a film titled Donkey Punch, which refers to the sexual act of punching a woman in the back of the head during intercourse. Much discussion ensues regarding what this says about Kyle, the porn industry’s treatment of women, and Sam’s very staunch sexual boundaries. Putting aside her reservations Sam goes out with Kyle, a rocky encounter to say the least, but that quickly leads to Sam’s complete transformation into a self-described sexually liberated woman starring quite literally in the pornography of her life. This sets off a series of unfortunate events that test the women's friendship and Kareena’s confidence in herself, the choices she’s made, and her treatment of those closest to her.

If this all sounds a little heavy it’s because it is, or at least it thinks it is. As written by Micheline Auger, Donkey Punch is entertaining and in certain stretches enthralling even, but it’s trying a little too hard. There isn’t anything particularly shocking or revolutionary here, but it talks a big game, complete with some seriously stale cultural references that add to an overall atmosphere of behind the times. “They even have pole dancing classes at my gym!” Oh, really Carmen Electra? Still, Audrey Alford’s aggressive direction manages to engage, and even if the script feels dated, her take is fresh. The performances are assured and the relationships have spark, particularly when Cleo Gray and Jon McCormick are involved. The two have a scene late in the show that provides the standout five minutes of the evening, leaving me wanting more of their obvious chemistry and imagining them chewing on a two-hander, Venus in Fur perhaps.

Overall this is an engaging production in the capable hands of some talented folks. The play may not leave you pondering the idiosyncrasies of the modern female experience, but I’m betting the evening itself will linger. Sexy, smart, and a little dirty, Ivy Theatre Company and director Audrey Alford’s production of Donkey Punch is worthy of attention.

(Donkey Punch plays at SoHo Playhouse, 15 Vandam Street, through August 31, 2014. Performances are Wednesdays through Saturdays at 8PM and Sundays at 6PM. Tickets are $45 and are available at sohoplayhouse.com or by calling 212.691.1555. For more information visit ivytheatre.com.)