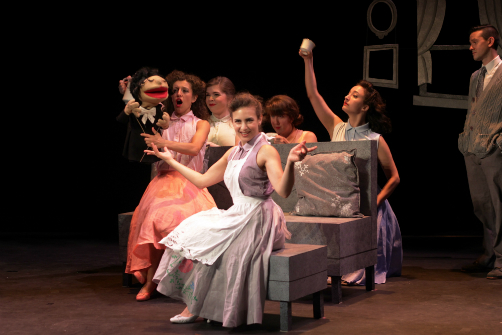 BOTTOM LINE: This production uses an intelligent blend of movement, puppetry, and design to re-imagine Ibsen’s A Doll’s House to the 1950s American suburbs. The attention to detail and historical quotation offers enough food-for-thought to make up for vague character development.

Upon taking my seat and looking at the stage I instantly understood the world of the play. From the set’s sharp angles to its grayscale color pallet it was very clear exactly which decade I was about to be immersed in. (The 1950s advertisements flickering on the television were a helpful hint, too.) And once the play begins, Nora (played with passion and care by Zoe Farmingdale) offers an introduction to the play’s robotic stock movements – gently sipping coffee, vacuuming the home, washing dishes – all orchestrated by “Man” (played by Michael Racioppa). He continues to pull strings and observe throughout the play while Nora struggles to breathe in a man’s world.

Mostly, writer and director Teresa Bayer has kept the basic plot of Ibsen’s A Doll’s House intact. Nora is a young woman eager to fit the role of a perfect housewife to the letter. In this adaptation, Nora and her husband have returned home from a long trip to Florida where he had been cured for an illness he acquired during World War II. However, as the story unfolds we learn of the various unladylike measures Nora had to take in order to afford the trip to Florida and to afford their home while he was overseas. In struggling to fit the role of the perfect homemaker (and into the perfect waistline), Nora’s desperate attempts to keep her secrets hidden go awry. A man she borrowed money from threatens to deliver a letter to her husband detailing every “immoral” action she ever took. In the original script, Nora’s husband finds the letter in their home’s mailbox. However, in Beyer’s reimagining, Nora takes the letter with the intention of delivering it herself.

I found many of Bayer’s artistic choices fascinating. The choice to make every other character besides Nora and “Man” puppets added a new layer of thought to the play, especially upon noting that “Man” is the only character played by a man; every puppet is handled by a woman. My favorite addition was how each woman in the cast would bombard or interrupt the scene behind television frames to reenact popular ’50s advertisements. It was an interesting device to keep the audience in the time period while also a clever nod to Betty Friedman’s The Feminine Mystique.

As much as I enjoyed the play’s form and vision, I felt there was something missing in character. For example, although I understood Nora’s decision to take the letter from an intellectual standpoint, I had difficulty finding Nora’s emotional transition from feeling powerless to empowered. Putting aside 1950s feminism and philosophies on female self-actualization, it is no small feat to take responsibility for what society considers your undoing.

Despite the lack of character exploration, the show is thoughtful and the actors give it their all from beginning to end.