Book by Duane Poole, based on the short story by Truman Capote;
Music by Larry Grossman; Lyrics by Carol Hall; Directed by Charlotte Moore
Produced by the Irish Repertory Theatre 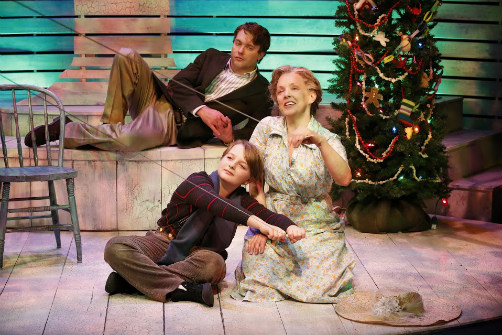 Silvano Spagnuolo as young Buddy, Alice Ripley as Sook, and Ashley Robinson as adult Buddy in A Christmas Memory.
Photo by Carol Rosegg.

BOTTOM LINE: A true meaning of Christmas told in this heartfelt, bittersweet musical that is infused with memorable songs and tinged with ragtime and blues.

The musical opens with a distant piano solo as a bright-eyed, neatly dressed young gentleman arrives in his hometown rural Alabama; the year is 1955. This is where Buddy, the narrator (Ashley Robinson), has spent his childhood. He reminisces about the bygone days with Anna (performed by Virginia Ann Woodruff), who was a housekeeper in his childhood’s home. After all these years, there is one memory he is particularly fond of, one that he cannot forget.

“Imagine a morning in late November…Consider the kitchen of a spreading old house in a country town. A great black stove is its main feature; but there is also a big round table and a fireplace with two rocking chairs placed in front of it. Just today the fireplace commenced its seasonal roar… 'Oh my,' she exclaims, her breath smoking the windowpane, 'it's fruitcake weather!' "

These are the opening words to Truman Capote’s classic short story “A Christmas Memory”. It is the tale of two best friends, Buddy and Sook. Sook, a distant cousin to Buddy, spent a lot of time with him as a young child. Sook is also much older than Buddy: as Capote describes, “a woman with shorn white hair… wearing tennis shoes and a shapeless gray sweater over summery calico dress.” My first impression of Capote’s short story is his stunning nostalgic mood, and his concise, deeply felt words. Even a non-believer (someone who doesn’t know about Christmas and fruitcake) is trapped and captivated by his 1933 world in the American South.

The musical stays mostly faithful to the original, with music added throughout. What would the sounds be in “A Christmas Memory”?  Composer Larry Grossman cleverly infuses ragtime and blues materials, reminding us of the early 20th century. There are even ukuleles on stage. The orchestration by Steve Orich is done well. The music is subtle, not overpowering. A soft upright piano, bass, and other acoustic percussion instruments are behind stage; they leave room for the imagination, and some space for our mind to travel back in time.

The opening song is “Imagine a Morning”, followed by a cheerful and ragtime-ish “Alabama Fruitcake” sung by Buddy and Sook (Alice Ripley). There are many sweet and heartfelt pieces, like “What’s Next?”, “Paper and Cotton,” and “Nothing More Than Stars”. The lyrics by Carol Hall are tuneful and memorable. Ashley Robinson plays adult Buddy with an especially edgy, captivating presence, which draws me closer to Capote’s world. The songs didn’t favor the voice of award-winning actress Alice Ripley, but she plays her role with charm and dignity. Nancy Hess, as cousin Jennie, sings a memorable number in “You Don’t Know It”, a song that makes her character three-dimensional--a very nice touch in this production. Virginia Ann Woodruff plays housekeeper Anna Stabler with character and Southern charm. Last but not least, Silvano Spagnuolo performs young buddy in character with a nostalgic mood, and Taylor Richardson as Nelle Harper is a fun tomboy presence.

The set is white and modern, and makes use of the restricted space in the theater. Barry McNabb choreographs the seven-person cast with tact. This is an elegant, warming musical tale that is fun for the whole family, and reaches deeper into the soul. When it ends, it leaves you wanting more--both musically, and for the nostalgia of Christmas with loved ones.