Written by Ben Clawson; Directed by Artem Yatsunov
Part of the 2014 Frigid Festival

Off Off Broadway, New Play
Runs through 3.9.14
Under St Marks, 94 St Marks Place 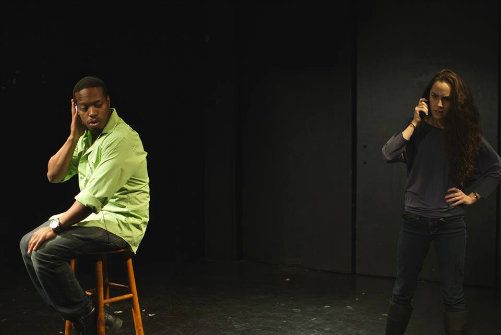 BOTTOM LINE: This comedy is laugh-out-loud funny, thanks to a clever script and talented actors. It also provides enough dramatic moments to give it meaning beyond the wisecracks.

In Strangedog Theatre’s Basic Help a customer service helpline begins as an exercise in everyday frustrations and expands into a mutually appreciated support system. The play opens when Simon (Gavin Earl Johnson), a customer service representative for a kitchen appliance line’s help line fields a call from an irate customer named Cynthia (Megan Greener). Cynthia has had to deal with so many automated systems that she is dubious that Simon is not, in fact, a robot. She tests him to see if he is truly a human being by asking him to describe what love is. Simon later astutely identifies her problem with her faulty blender (by asking her if the sound the blender makes is the sound a mouse would make it if were sick and coughing while lying in a bed made of cotton balls) and Cynthia’s hysterics seem to be quelled.

This seems to perhaps be the end of the show as the lights dim (some of the audience members began to hesitantly clap), but it is not...and Cynthia calls again. This time she is angry that she was not directly connected to Simon and had to fight with a series of operators to get to Simon’s line. She tells Simon that she lied when she had told him that the blender had been a gift and she bought it for herself off of her own bridal registry list when she broke up with her fiancé. Simon feels sorry for her, and tells her if she punches in a certain code when she calls next time she can be automatically connected to him.

Later Cynthia begins to make up reasons to call Simon. (Apparently, at this call center calls are not monitored or timed by the company.) While many of the calls are humorous, Cynthia begins to open up to Simon and reveals that she is at a difficult place in her life having just lost her fiancé and her job. She says she was one second at “full capacity” and then completely empty, now at a seemingly hopeless point where “the emptiness just spreads out around you forever.” She wonders how losing just two things could change her life so quickly from full to empty. Simon soon reveals that he too is at a rough place in his life, years out of college and still he is living at home with his mother and working a mundane job at a call center fielding calls from obnoxious customers.

Although this play is primarily a comedy, playwright Ben Clawson has cleverly placed poignant ruminations about how easily one can become lost in their own life, making this play ultimately about more than just fleeting amusement. Clawson shows his knack for comedic dialogue and the play’s dramatic moments only make this show stronger and more appealing. Director Artem Yatsunov also knows how to time the script’s many clever lines. Actors Johnson and Greener both bring appealing energy to their roles and show talent for both drama and comedy. All of these factors help to make Basic Help a show that is sure to have you laughing out loud. Unlike many shows in festivals, this one feels like finished, complete play, and hopefully this is one we will see again after Frigid.