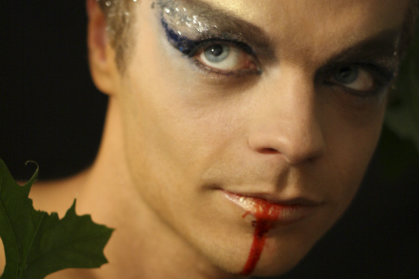 BOTTOM LINE: If you’ve ever asked yourself how ancient Greek tragedy is relevant to you, this Euripides adaptation offers some answers.

It takes guts, or gall, to “rewrite” a play that has been enthralling audiences for approximately 2400 years. Perhaps inspired by Dionysus, Greek god of drama and drunkenness, the American Bard Theater has created Bacchae Redux, a modern update and expansion of the well-known tragedy by that weirdest of ancient Greek dramatists, Euripides. The elements of the original play remain more or less intact: the aforementioned Dionysus is the protagonist, and out of a combination of divine wrath and earthly family rivalry, he exacts revenge on the king of Thebes, who won’t worship him and also happens to be his cousin. Playwright Jack Herholdt also plays the angry immortal, who (surprise!) gets all the best lines.

Dionysus has particular sway over women -- perhaps because of his own gender-fluidity; his “long hair” and feminine appearance are frequently remarked upon. With the help of his core followers, the Bacchae of the title (referring to the god’s alternate name, Bacchus), he has bewitched the townswomen of Thebes and sent them running wild in the woods to engage in dancing, sex and violence. Bacchae Redux departs most crucially from the original in that the Bacchae themselves are allowed to develop as characters. Instead of interchangeable members of the chorus, here they have histories and even independent thought. They give voice to some of the questions that might arise unspoken in the minds of the audience: one wonders whether Dionysus’ need for vengeance is really god-like; another regrets having left loved ones behind when she joined the cult. Like any other cult leader, Dionysus speaks of love, freedom, and “achieving one’s potential,” but punishes doubt and back-talk, making him even more fearsome than in the original.

Watching Bacchae Redux was somewhat disorienting for me: it was my first time seeing any version of Euripides’ play, though I have read it several times; consequently it was somewhat like déjà vu. However, the ways in which Herholdt departs from the original text add another layer of newness to the experience. The traditional tragic form is infused with thoroughly contemporary language (including the vulgar kind) and references to everything from telephones and cameras to department stores. These changes add wry humor to the show but, you know, this is Euripides we’re dealing with here. In most cases, his writing is going to be better. Granted, every modern production of The Bacchae is necessarily an adaptation (unless someone out there is doing it in ancient Greek), but even translated Euripides is hard to beat.

In addition to Herholdt, who looks and sounds great in his glam-rock inspired Olympian threads, worthy performances are given by Brad Brokman as Pentheus, the arrogant young “bro”-king, and Mickey Pantano as Agave, Pentheus’ mother, who has inarguably the most difficult scene in the play. Given how fabulous Dionysus’ costume is, his Bacchae deserve better, and the show’s musical elements are unmemorable and yet seem too few. But if you’re looking for a classic drama with an edgy feminist twist, Bacchae Redux will give you a peek into the distant past through a 21st century lens.

(Bacchae Redux plays at the Robert Moss Theater, 440 Lafayette Street below Astor Place, through August 19, 2014. Remaining performance is Tuesday 8/19 at 4:15PM. Tickets are $18 and are available at fringenyc.org.)