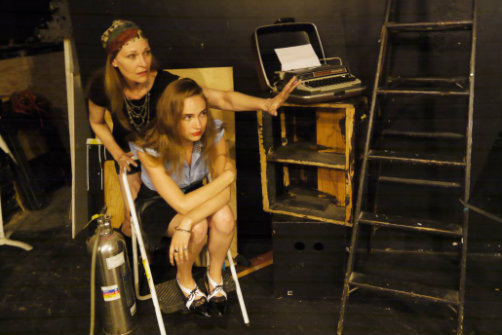 BOTTOM LINE: This play is enjoyable to watch thanks to a clever script and a strong comedic performance from Heather McAllister.

In April’s Fool the theatrically reoccurring theme of complicated love triangles is mixed in with the supernatural as playwright Kelly McAllister explores what happens when a group of single New Yorkers, all of whom desire the wrong person, meet a series of supernatural and mystical events. When the play opens we are introduced to a rather unhappy love quadrilateral: wannabe actress April (Sarah Wharton) has her eyes on poet Ahab (Ian Campbell Dunn) but he longs for his one night-stand Moira (Liz Conway) who is living with the rich narcissist Jaypes (Casey Shane) who seems to be only capable of loving himself.

All this sexual confusion is interrupted by the arrival of a Norn to their costume party (according to Norse mythology, a Norn is a woman who controls the fates of the gods and of men) who is played by Heather McAllister (the playwright’s sister) who shows versatility in her performance as the Norn will pop up again and again as different characters (this sounds confusing but once the play starts it all makes sense). Each time that she arrives the fates of the characters will shift and they will reevaluate their unwise pursuits.

McAllister’s clever script, which features carefully etched out lines, drops reference to Lewis Carroll, The Talking Heads, and Shakespeare, helping to keep the dialogue fast paced and compelling. Heather McAllister does justice to the script as she belts out each clever quip with perfect timing and delivery (thanks also to Bronwen Carson’s direction). The show does get a little long winded in some scenes despite the clever script and could use a bit of trimming, but is overall a funny, charming, and one of a kind show with unusual characters that will leave a lingering memory long after the show is over.