A List of Irrational Fears for Future Leaders of the World 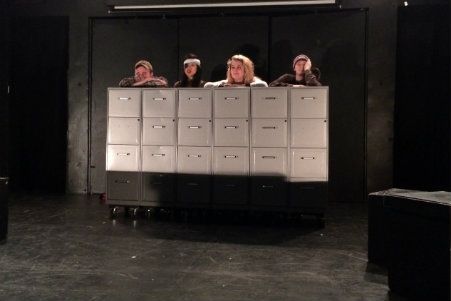 Tyler Ward, Lani Fu, Coryn Carson and Andrew Terrence Kaberline in A List of Irrational Fears For Future Leaders of the World. Photo by Alex Burns.

BOTTOM LINE: A blistering look at the culture of tragedy in the new millennium from a passionate, young theater company.

When you live and make theater in New York, The Capital of All Cultural Things, you can easily forget that new, vital plays can be and are produced in other parts of the country. Critical Point Theatre, a company from Blacksburg, Virginia, has brought such a play to our fair city this month. A List of Irrational Fears for Future Leaders of the World is currently gracing the Kraine Theater as part of Frigid New York 2014, and the cultural buffet that is New York City feels all the richer for it.

This nervy play, penned by Andrew Terrence Kaberline, explores the frayed emotional state of Kenrick (also Kaberline) and the seventeen years following a family tragedy. In that time he falls into a tumultuous relationship with Jorja (Lani Fu), whose character could best be described as a “dark manic pixie dream girl.” The two lash out, wound each other, love each other and wreak emotional havoc on each other in the way that only two damaged people can. Kenrick and Jorja’s loved ones (multiple roles by Coryn Carson and Tyler Ward) can only watch the inevitable fall-out from the sidelines.

Critical Point Theatre is comprised of recent Virginia Tech alumnae, and Fears is driven by a youthful, brazen, often restless energy. Kaberline uses Kenrick and Jorja to explore a culture numbed by perpetual tragedy, and the souring dreams of a generation that was once promised better things. There are a lot of raw emotions at the forefront of Fears: fear, of course, but also rage, confusion, and hopelessness. One might expect a playwright of Kaberline’s youth and experience level to make a big mess of such an ambitious undertaking, but Kaberline conveys Fears’ themes with surprising eloquence and poise. It is such a confident, polished play, and to know that this is Kaberline’s first full-length work is mind-boggling.

Kaberline is as effective an actor as he is a playwright. His Kenrick is equal parts arrogance and vulnerability, and he has a crackling chemistry with Fu, who brings a fawnish charisma to the enigmatic Jorja. I enjoyed Carson very much in her dual roles of Kenrick’s therapist and cousin. She brings a warm, world-weary energy to the stage, though her two characters would have benefited from a clearer contrast. My favorite performance of the night, though, belonged to Ward. Ward plays Jorja’s therapist as a book-smart man clearly out of his depth and Jorja’s pizza-delivering ex-boyfriend, whose own anger issues cannot mask a wounded, yearning heart. Ward is unexpectedly delightful and provides Fears with some of the play’s most genuine comic moments.

The set, designed by Dylan James Amick, consists of four rolling pillars of file cabinets, which the actors adjust to convey different settings. During the course of the play, papers are pulled from the cabinets and strewn across the stage. Towards the end, the stage is nearly apocalyptic with clutter. It is a brilliant way to represent the characters’ scattered psyches.

A List of Irrational Fears for Future Leaders of the World is a welcome addition to Frigid and to New York. The city is definitely better for Critical Point Theatre’s presence, and, honestly, they could rule this city if they so chose. I, for one, would like to welcome our new Virginia theatrical overlords, and ask that their reign be as peaceful as it is productive. Long may they reign!

(A List of Irrational Fears for Future Leaders of the World plays as part of the 2014 Frigid New York Festival at the Kraine Theater, 84 East 4th Street through March 1, 2014. Remaining performances are Thursday, February 27th at 5:30PM and Sunday, March 1st at 3:40PM. Tickets are $10 and are available at frigidnewyork.info or by calling 212.868.4444.)