Working on a Special Day 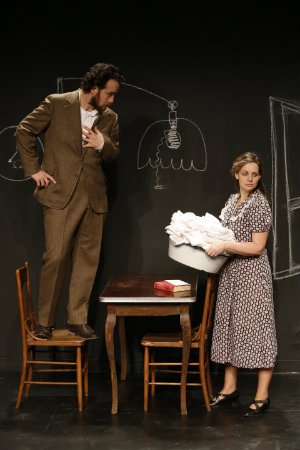 Antonio Vega and Ana Graham in WORKING ON A SPECIAL DAY. Photo by Carol Rosegg.

BOTTOM LINE: Two great actors and some chalk make for a beautiful interpretation of a renowned movie.

How do you stage an Italian movie about unrequited love set on the day Hitler visits Mussolini's Rome in 1938? If melodrama is what you're after, a literal translation will do; luckily the fine folks at Por Piedad Teatro and The Play Company realized that clever minimalism can take the audience much farther, much more elegantly.

Working on a Special Day is an adaptation of Ettore Scola's film Una Giornata Particolare. The play is directed and performed by Ana Graham and Antonio Vega, as a co-production between The Play Company and Mexico City's Por Piedad Teatro, where Graham is the artistic director.

Graham and Vega create several characters in Working on a Special Day, exposing the cacaphony of a busy Italian apartment building. Primarily though, they are Antonietta, tired and abused wife and mother, and Gabriel, bachelor and political dissident. A random occurance with a runaway parrot puts Antonietta in Gabriel's apartment, and the two begin a friendship that grows deeper and more exciting though it only lasts a day. Budding feelings and the thrill of what could be offer optimism and joy set against the circumstances of the "special day" at hand. This juxtaposition is beautifully rendered. Graham and Vega evoke a sweet connection in their characters' relationship, while the brooding political events are pervasive but never in the foreground. The sound design (adapted by William Neal, originally by Rodrigo Espinosa) provides a parade outside as the backdrop to the love story.

This is a tale about two individuals and the broad political ramifications of the day; though much happens, it is hardly action-packed. To faciliate this storytelling, the production plays up its theatrical magic to great effect. As the play begins, Graham and Vega enter as themselves and introduce the house manager who gives the curtain speech (turn of your phones, no intermission, etc.) and then we enter the world of the play in which we watch Graham and Vega get into costume and become Antonietta and Gabriel.

The stage is nearly empty except for two chairs and two tables. But with a savvy set design including some chalkboard painted walls (designed by Gabriel Pascal and adapted by David L. Arsenault), Antonietta and Gabriel draw the items they need as the play progresses. For example, if a character needs to open a window already drawn on the wall, they will do so with chalk and an eraser. If they need to season a meal, they will draw a salt shaker. If they need to ring a doorbell, they'll draw one (and then naturally make a buzzing sound to indicate its use). Graham and Vega fill in the remaining details vocally and physically through generous, committed performances.

Working on a Special Day is remarkably true to its story without taking itself too seriously. This is in large part due to the stripped-down design elements, but most credit can be given to the performers who successfully bring the world to life and expose the humanity of the characters. Working on a Special Day is a brilliant production of a touching story, and it wisely uses creative storytelling to amp up its emotional capital. Only the most jaded theatregoer could leave the theatre without feeling moved.