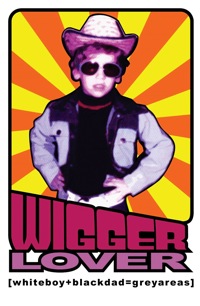 BOTTOM LINE: James Anthony Zoccoli tells his true and hilarious story of growing up with his Polish mom and African-American stepfather in the 80s.

Words can possess tremendous power, but only if we allow them to, as illustrated in the childhood chant: sticks and stones may break my bones, but words will never hurt me. As a child in Illinois in the 1980s, James Anthony Zoccoli, the writer and performer of Wiggerlover, rolled with the punches as his family, acquaintances, and strangers all threw a cornucopia of controversial words his way.

Zoccoli captures our attention with the first moments of the show. He is at an acting audition where he is required to say the line “wiggerlover “(but replace the “w” with an “n”) repeatedly. As he transports us back in time to his childhood it turns out that was not his first exposure to the “n” word after his white Polish mother married a black man in the '80s. The journey Zoccoli tells us follows his own young life as it is influenced by Mr. Bell, who eventually becomes “dad” to him, and how the people in his life designated him to a black or white lifestyle. With an identity crisis at such a young age, Zoccoli thrived on being called the “n” word. One of the funniest moments in the show is his reaction to being told to get his “black ass” in the house.

Zoccoli was a child in the 1980s and that music and TV influenced his life just as much as the slang and controversial terms did. Instead of feeling uncomfortable, he enjoyed being associated with what others called “acting black.” Nurture versus nature is a huge issue, and in this case it gave Zoccoli countless stories of freezetag being “the great equalizer,” and his grandparents disassociating from his family, and a strict step-father who cared enough to teach him responsibility.

Though this is a one-man show, Zoccoli performs impressions of his mom, dad, step-dad, celebrities, kids he met, and countless other bits that caused the audience to crack up at the performance I attended. At least once every five minutes we were graced with Zoccoli’s convincing and astounding work. I would bet money on being able to identify Zoccoli’s family if I encountered them one day due to how he acts with such specific and enthralling facial expressions.

Walking into the IRT Theatre prior to the start of Zoccoli’s performance you are met with a retro and upbeat atmosphere. The projector screen on stage shows an awkward school photograph of an adorable young Zoccoli in a familiar fake outdoors scene. That is paired with lively hiphop emitting from the DJ’s table on the side of the stage. That table is decked out with a funky cloth and white tube lighting weaving in and out of all of his electronics. Now when I say DJ, I mean this particular DJ, Gregor Mortis, a real artist scratching vinyl to the CD’s beats. It also turns out he is integral to the show. Zoccoli and Mortis interact and keep up the welcoming and fun-loving attitude the entire performance, including inserting dance breaks as transitions, during which I could not help but smile at the dance moves and music choices.

Sure, there are lots of controversial subjects from whooping kids and certain words white people would be beat up for speaking out loud, but Zoccoli adds his humor to these true stories so it would be difficult for anyone to feel uncomfortable. At one point during the show Zoccoli felt the need to tell us, “These are the jokes people,” but there was no need to remind anyone in the audience. He earned our laughs and we gave him an ongoing and deserved supply.

(Wiggerlover plays atthe IRT Theater, 154 Christopher St. buzzer 3B, New York, NY 10014. Presented by the terraNOVA collective as part of the 10th Annual soloNOVA Arts Festival, May 22 through June 11, 2013. Tickets are $20. Purchase tickets at the door or online at terranovacollective.org.)