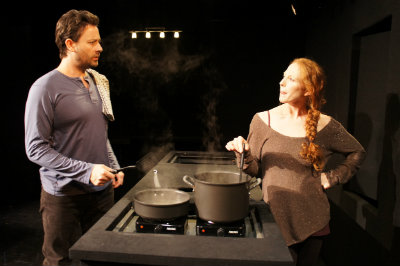 The curtain opens on two characters preparing a meal.By the end of the play, the meal is eaten. That much I can give away about What We Know; what lies in the middle is murky and mysterious, yet satisfying.

What We Know -- written by British playwright Pamela Carter and enjoying its U.S. premiere with One Year Lease -- begins mundanely enough. Jo (Nick Flint) teaches his girlfriend Lucy (Sarah-Jane Casey) how to prepare a meal of gnocchi with tomato sauce. Their comfort and banter reveal an intimate, lived-in relationship. The meal made on stage is genuine: real knives cut real vegetables and real aromas waft through Teatro Circulo as a real sauce simmers. This simple meal is what grounds What We Know as the plot gives way to surreal twists. One character disappears, other characters pop out of nowhere and all the while that delicious meal cooks.

What We Know is also grounded by the phenomenal work of its talented and focused cast.Nick Flint has a charming, playful energy and he gives the play an initial sense of warmth and familiarity. As a young stranger who makes an unexpected appearance, Ethan Slater jolts the play into another direction with a vivacious performance.Kim Weild, Vanessa Kai and Richard Saudek bring their respective strengths to a dinner party scene towards the end: Weild is dryly hilarious, Kai is warm and understated, and Saudek is affable and vulnerable.Casey gives, by far, the stand out performance. She handles her character’s expansive emotional journey with grace and subtlety.

What We Know is one of the best acted shows I have seen this year, and much of the credit goes to directors Ianthe Demos and Natalie Lomonte for guiding their actors through confident performances. The deceptively simple set design by James Dardenne also gives the play hints of surreal magic as items disappear or sometimes pop out of the black, monochrome kitchen. The lighting design by Mike Riggs lends the play a creeping dreamlike quality. All of these artists employing the best of their craft make What We Know a fascinating, achingly beautiful experience.

I don’t want to give too much away about what happens in What We Know. The richness of my own viewing experience came from not knowing what to expect. I will say that as the play settled into its conclusion I found myself more emotionally moved than I expected to be. What We Know twists and turns, but in the end it is a beautiful journey.

(What We Know plays at Teatro Circulo, 64 East 4th Street, through December 21, 2013.Performances are Tuesdays through Saturdays at 8PM and Sundays at 3PM.Tickets are $30.Tickets are available at ovationtix.com or call 866-811-4111.)