Written by and Starring Jinkx Monsoon and Major Scales 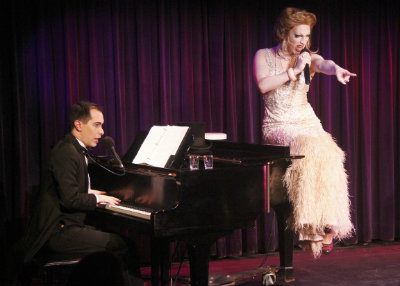 Jinkx Monsoon as Kitty Witless and Major Scales as Dr. Dan Von Dandy in THE VAUDEVILLIANS. Photo by Wilson Models.

BOTTOM LINE: Cabaret at its very best, and this time featuring "America's Next Drag Superstar."

There's a very good reason Jinkx Monsoon won the fifth season of RuPaul's Drag Race this past May. Even if you were on Team Alaska or Team Roxxxy, Jinkx's theatrical talents were obvious. She was always more than just shtick and glam. And now to prove that point, Jinkx has brought her cabaret show, The Vaudevillians, to New York for a nearly sold-out extravaGAHNza.

Cabaret shows are somewhat set up for success, with a set list of fan favorites and a bar minimum to satisfy. But they don't always offer true theatrics. The Vaudevillians is a bit more complex than your average cabaret, as the characters and conditions are cohesive and there's even somewhat of a plot. It's by no means sophisticated, but it stands on its own as a show, drink in hand or stone sober. I'm not sure if someone directed The Vaudevillians or if it was purely constructed by the performers themselves, but it is thoughtfully put together to make for a very satisfying event.

In The Vaudevillians, Jinkx (real name Jerick Hoffer) plays Kitty Witless, half of a 1920s song-and-dance act with her counterpart Dr. Dan Von Dandy (played by Major Scales, real name Richard Andriessen). Kitty and Dr. Dan were accidentally cryogenically frozen and recently thawed, and they have discovered that many of the songs they themselves wrote in the '20s made their way to popular contemporary music, which obviously bastardized the original compositions. Kitty and Dr. Dan are touring again to reclaim their work. Though the show begins with the 1930s show-stopper "Anything Goes" from the musical of the same name, the music quickly ventures into pop culture territory, as Kitty and Dr. Dan perform "Bad Romance," "Tainted Love," "Girls Just Want to Have Fun," and other Top-40 tunes, in the retro style of the '20s.

The musical arrangements in The Vaudevillians are surprisingly impressive. In one mash-up, "Toxic" seamlessly becomes "Hey Big Spender," but only for a few moments, just enough to color it. The marriage of drag queen and cabaret could easily lend itself to an overload of camp, but Kitty and Dr. Dan keep the histrionics at a minimum. Instead of just high camp, The Vaudevillians offers genuinely funny jokes and one-liners. My favorite of the night -- spoiler alert -- back in the '20s the duo performed with their Band Von Bandy.

I'll be honest, I was giddy to see this show, and I was expecting a Drag Race send-up or a special guest or at the very least Jinkx to say "water off a duck's back." But I didn't get any of that. And that's how you know that this lady's for real. The Vaudevillians stands on its own, apart from Jinkx's TV success and the context of drag culture today. Both Jinkx and Major Scales bring serious chops to the stage, and the result is highly entertaining.