The Unavoidable Disappearance of Tom Durnin 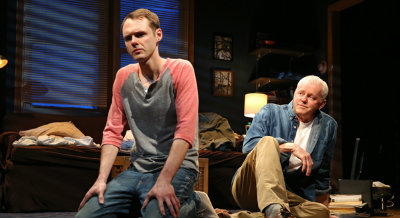 Christopher Denham and David Morse in THE UNAVOIDABLE DISAPPEARANCE OF TOM DURNIN. Photo by Joan Marcus.

BOTTOM LINE: The aftermath of a white collar criminal is fascinating, if not compelling.

When the news of Bernie Madoff’s Ponzi scheme came out in the open, a common question among Americans was, “How can so many people be duped by one man?” Madoff was the single most destructive con-man in the history of the country. One by one he convinced thousands of investors to put money in his investment firm and then falsified their returns. He ruined the lives of his family and friends knowingly, and kept up the scheme for at least 20 years. Playwright Steven Levenson takes a well-crafted -- albeit cursory -- shot at exposing exactly such a personality in The Unavoidable Disappearance of Tom Durnin, now playing in a smartly directed production by Scott Ellis at Roundabout Theatre’s off Broadway space.

Tom Durnin (David Morse) is a minor offender, compared to Madoff in Levenson’s script. Exactly what he did to deserve five years in prison is revealed eventually in the play, but is essentially a smaller scale version of Madoff’s white collar crime. What Levenson is examining moreso is neither the actual crime or punishment, but the aftermath in the homecoming of a man who is determined to win his family back using the same deceitful skillset he used to take advantage of anyone willing to give him an ounce of trust. While Tom is the titular character, his son James (a vulnerable performance by Christopher Denham) is the emotional focus of Levenson’s story.

In the opening scene of the play we find Tom visiting James, who he refers to by his boyhood name “Jamie.” Quickly we see the con-artist in action as he convinces his son to allow him to stay for a month. The play is populated with almost entirely two person scenes. We see James and a new quirky love interest, Sarah, outside of a community college where they are taking a creative writing course. Katie Nicholson plays Sarah with the perfect combination of over-eagerness and low self confidence that it’s impressively hard to watch at times. Other duets include Tom and his son-in-law Chris (played convincingly by “Mad Men” star Rich Sommer). Stage veteran Lisa Emery plays Tom’s ex-wife, Karen, who has since remarried an orthodontist named Richard (who is likely a touch more boring than Tom, but safer).

Everyone in Tom’s world is making notable strides at moving on with their lives, and Tom will stop at nothing to impede all progress. These two person scenes are fascinating for communicating character backgrounds at the start, but lack action as the play goes along to fully keep the audience engrossed. There’s a formula of Tom convincing a family member to relinquish just enough for his own personal gain, but the reprucussions are mostly kept off stage. When tension does build to shouting matches on stage Levenson’s writing and the performances are at their most artificial.

However, Levenson’s dialogue and subtlety is superb even if the plot lacks action and the material lacks any major revelations. His drawing of mannerisms through language is expert and I actually look forward to him tackling material which isn’t so overtly topical. Ellis keeps the transitions and moments as compelling as possible. Beowulf Boritt’s set is a smartly designed turntable illuminating the contrast of where James lives now (a vacant land of suburban foreclosure) and where he came from.

David Morse as Tom never quite wins over the audience’s trust as he does with his family; although, this is perhaps exactly as it would be to have an outside perspective on this family drama. It’s clear from the beginning that Tom is bringing too little too late to the table. What keeps the audience on the hook though is how Morse manages to charm, threaten and guilt his family into resigning to his will.

In the end though the title tells it all; Tom must disappear and his family must be allowed to move on with their lives. It’s a far happier ending than the repercussions throughout the Madoff family. This is maybe why the script lacks the ability to remain dramatically engaging -- unfortunately, we’ve seen this story before and the reality was far more shocking than the fictional account Levenson has brought to the stage. If Madoff was a monster, Tom Durnin is a weak minion.